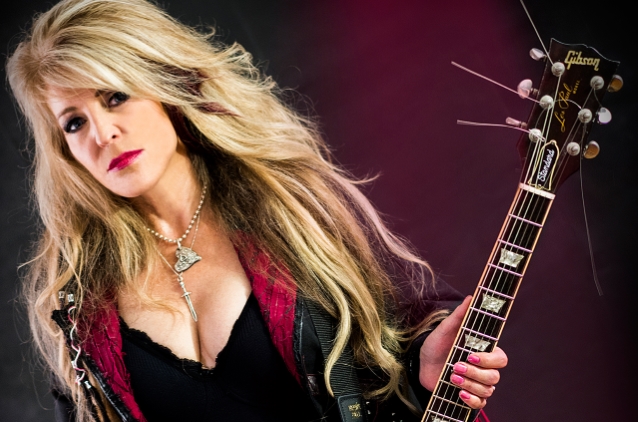 JANET GARDNER On Her Exit From VIXEN: 'I Got To The Point Where I Kind Of Felt A Little Bit On The Outside'

Janet Gardner spoke to Meltdown of the Detroit radio station WRIF about her departure from VIXEN. The singer, who released her debut self-titled solo album in 2017, broke the news of her exit from the group in a social post in January.

"It took me a long time to actually make that decision, 'cause it's a big one," she said (hear audio below). I did the typical — sit down, write out the pros and cons, really think about what's best for everyone involved, including them. And six months later, I definitely think it was the right thing to do. Everybody seems happy, making music, doing their thing. So, yeah, all good."

Asked if she really sat down and wrote a list of reasons why leaving VIXEN was the right decision, Janet replied: "I did — for real. Oh, yeah! It definitely helps to write things down and visualize it. All big decisions in my life that I've made I've done that, and I really think it's helped… [It was] a really long list — of both pros and cons. A lot of great, great stuff. And what a way to go out. Last summer, we played huge festivals in Europe — we played Graspop, we played Nummirock, we played Sweden Rock. What a way to go out. It was awesome."

Gardner went on to say that there were a myriad of reasons for why leaving VIXEN was the correct thing for her to do at this time of her life and musical career.

"Obviously, we've gone through periods where [VIXEN was] inactive, and you develop other things in your life that are important to you — family commitments and things like that," she explained. "And band dynamics change like crazy — different alliances, two people are on this page and somebody feels a different way. It's a constantly evolving relationship. So it's a miracle that any bands keep any kind of consistent membership over the years; it's really hard to do… Two people are buddied up about something, and you're not feeling the same way, and then another two people will be feeling the same way about something, so you develop a bond there. It's constantly evolving. So, yeah, I got to the point where I kind of felt a little bit on the outside, and that's not a very comfortable feeling when you're trying to be creative and let things flow. Most of it was my personal stuff and family commitments, and, like I said, the life that I had built outside of VIXEN is a high priority with me. But there were other things too. That just sort of led to the whole thing."

Gardner described her split with VIXEN as amicable, although some fans are apparently refusing to see it that way.

"It's funny, because people are choosing sides on a fight that doesn't exist," Janet said. "They're, like, arguing and choosing sides. And it's, like, there's no fight — we're not fighting. I didn't try to steal the name. I walked away with nothing, gave them my blessing to carry on, and that's what we're doing. So it's just kind of funny to me. People are, like, 'I, for one, am not gonna support your solo stuff. I'm staying loyal to VIXEN.' It's, like, 'Well, okay. But why? You can support both sides. I don't think anybody is gonna be mad at you if you like what both sides are doing.' Anyway, that's funny to me."

Lewis had already performed with VIXEN, having fronted the group in March 2018 in Durant, Oklahoma while Gardner was recovering from surgery.

Gardner released her second solo album, "Your Place In The Sun", on May 31 via Pavement Entertainment.

Like her 2017 debut self-titled solo effort, the new disc is a collaboration with her husband, guitarist/producer Justin James, who has previously worked with STAIND, COLLECTIVE SOUL and TYKETTO.