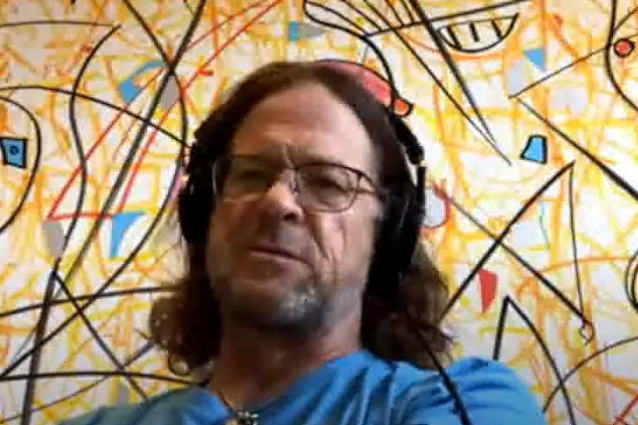 Former METALLICA bassist Jason Newsted says that he is "really not happy" with the article that was recently published based on an interview he gave to promote an upcoming charity concert.

A little over a week ago, Jason spoke to The Palm Beach Post about the April 23 show he will perform with his THE CHOPHOUSE BAND at the Maltz Jupiter Theatre in Jupiter, Florida. It is a benefit event for the Goldner Conservatory, a professional conservatory that offers the highest caliber of artistic education to students of all ages. During the chat, Newsted touched upon the various artists that have approached him in recent years about playing bass with them, including a proposed all-star VAN HALEN tribute project featuring VAN HALEN drummer Alex Van Halen and guitarist Joe Satriani.

After The Palm Beach Post article was published, Jason's bombshell revelation about the VAN HALEN tour offer dominated the music news headlines, with many fans expressing their surprise at the fact that such a project was in the works. In addition, Satriani himself said that he was taken aback to learn that Jason had revealed the project's existence before everything was finalized and an official announcement was made.

Jason addressed the media and fan response to his VAN HALEN comments in a brand new interview with the 98.7 The Gater radio station in West Palm Beach, Florida, Speaking about the fact that The Palm Beach Post article didn't sufficiently focus on the upcoming charity concert, he said (as transcribed by BLABBERMOUTH.NET): "That was bad, dude. I'm not happy about that. I'm really, really not happy about that."

When asked by 98.7 The Gater DJ Pat Lynch if The Palm Beach Post journalist printed stuff that he said off the record, Newsted replied: "I don't do very many interviews anymore, and I agreed to do that to promote the show for the kids. We do benefit shows to put paintbrushes and guitars in kids' hands. That's what I'm doing now. The METALLICA 'Black Album' did so well and it still does to this moment, [and] because of that I'm able to do what I want with whatever projects I have going. THE CHOPHOUSE BAND is the longest-running project. The things that we do five to six times a year — we do benefits, period, for art programs for kids. That's it — music classes and art programs. That's why I agreed to do that interview, was to forward the information about the Goldner Conservatory at the Maltz [Jupiter] Theatre that's gonna have classes for kids and do exactly what I said. So if I go to talk about that, and I mentioned two little things over here about the calls that I've received in the past 20 years from whoever it is — Alice Cooper, AEROSMITH, whatever; man, whatever — I was just listing a list of the calls that I received over time that never went anywhere. I only said yes to a couple of the 30 that I received, and I mentioned a couple of them that impressed me. People that if I wouldn't have had their records, I wouldn't play the way I do, they called me on my home phone and said, 'You wanna come and jam with us?' Dude, I'm off the ground; I'm levitating. I'm, like, 'Why would AEROSMITH call me?' That's a big frickin' deal to a kid. Just a kid from a farm in Michigan, dude, and a guy from AEROSMITH calls and asks me to play bass? However many years later when you stole that album from your brother's collection. It's frickin' huge. That's all I was doing. I talked about two seconds about that, and that's what they chose to go for. They didn't talk about the Conservatory, the kids' classes, the things that we're doing, THE CHOPHOUSE BAND, why we do that we do.

"Nobody makes any money in THE CHOPHOUSE BAND," he continued. "Everybody volunteers their time — the camera guy, the guitar tech. We just do it to try to help out and give back — that's it. We try to make some community thing. So when the press runs with it that way… And also I think just the straight-up lack of awareness, lack of study about what my past story is that's already been told 700 times. You know, those kind of things that are already very, very obvious news that you can get that information, why are you asking me that question again? It doesn't make any sense. Let's get on to what we're getting on with. There's a future here. Everybody knows about my past. Let's please talk about what's coming, not what has already happened."

"That really rubbed me wrong," Newsted added. "I don't know what interviews I'll do again. I'm not sure if I'll say yes to anything."

Just a few days ago, Satriani told the "Rock Of Nations With Dave Kinchen" classic rock show that he was astonished to find out that Jason had discussed the proposed VAN HALEN tribute project with a journalist. He said: "These things are always happening in the music industry, and you're supposed to keep very quiet about it [laughs], because sometimes they don't work out. There's usually about 10 crazy ideas that float around and musicians are always, like, 'Okay, I won't say anything about this 'cause it may not work out. I don't wanna hurt this person's feelings or disrupt any other business plans.' So, yeah, we were all pretty shocked that Jason wanted to go public with it 'cause we were all sworn to silence. [Laughs]"

Jason left METALLICA in 2001 but was inducted into the Rock And Roll Hall Of Fame, along with guitarist/vocalist James Hetfield, drummer Lars Ulrich, guitarist Kirk Hammett, and the man who replaced him, bassist Robert Trujillo, in 2009.