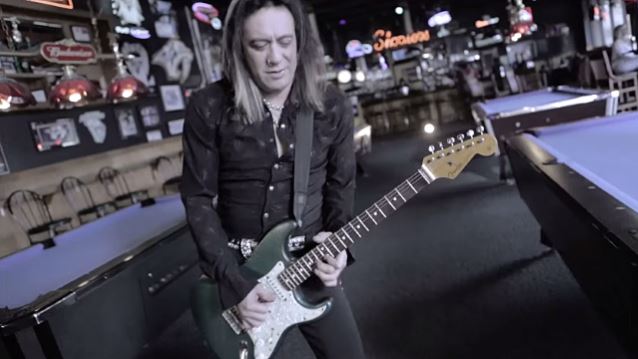 In a recent interview with BigMusicGeek.com, CINDERELLA guitarist Jeff LaBar was asked if he thinks there will ever be an all-new studio album from the band.

"The last time we had a label behind us was back in 2000 and those are the demos that turned into Tom's [Keifer, guitar/vocals] solo record," he responded.

"I don't know. Record labels these days... I don't think anybody is signing.

"We could make a record ourselves and present it to a label, but it's probably not going to happen. We could do all kinds of records on our own.

"I would love to record as a band... as CINDERELLA again. I would imagine that some record labels would dig it and come try to sign us, but I just don't know. That's a very tough question. I don't know how that would work."

Regarding whether fans can expect to see CINDERELLA touring on a more frequent basis as the nostalgia for the '80s continues unabated. LaBar said: "The problem is when we tour, we are essentially a nostalgia act.

"In reality, it's the older people that love the old records that come out.

"I've seen REO SPEEDWAGON, JOURNEY and all of them in concert and it's always the older people that come out and want to hear the old hits. Unfortunately, we are kind of in the same boat, but at the same time, there are several bands from our genre, like POISON, RATT, WARRANT and WINGER, that still put out records. But how many people actually buy them? That's the problem. Who's actually going to buy them? That's the rub.

"We would absolutely love to put out a new record and get lumped in with all of the other '80s bands out there that still record and put out records that nobody really buys.

Labar released his debut solo album, "One For The Road", on August 26, 2014 through Rat Pak Records. The CD was recorded in Nashville, Tennessee with longtime friend and noted engineer Ronnie Honeycutt, and was mixed and mastered by Chris "The Wizard" Collier (KXM, LYNCH MOB, LITA FORD).