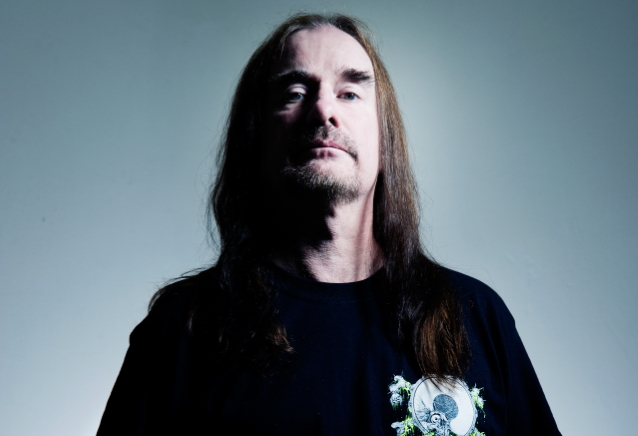 In a new interview with Australia's "Scars And Guitars" podcast, bassist/vocalist Jeff Walker of British extreme metal pioneers CARCASS spoke about the fact that his band's first two albums, "Reek Of Putrefaction" (1988) and "Symphonies Of Sickness" (1989),have influenced a generation of new bands to combine similarly graphic and consciously provocative lyrics with savage and deeply disturbed melodies.

"That's why it's kind of funny when people [say] they wish we'd go back to that style," Jeff said (as transcribed by BLABBERMOUTH.NET). "And I'm thinking there's been 30 years of bands emulating that style. Go listen to them. They did it so much better anyway. What would be the point in us attempting? We couldn't falsify doing that anyway. There's lots of bands doing that stuff, which is great. But it's not our band."

When interviewer Andrew McKaysmith suggested that CARCASS's fourth album, 1993's "Heartwork", was an influence on bands like AT THE GATES, IN FLAMES and DARK TRANQUILLITY, who are part of what is now widely now widely known as "the Gothenburg sound," a subgenre of heavy metal music that combines death metal with the melodious and harmonic elements of the new wave of British heavy metal, Jeff said: "I don't think those bands — and I use this word in a true sense — would ever admit to any CARCASS influence. They were running parallel at the same time. So I don't think that's fair to say that we had influence on those bands… I don't think we inspired them either. I think 'Heartwork' was as much a maligned album as [1996's] 'Swansong', in all honesty, back in its time. I don't remember getting rave reviews. I don't remember it being a very positive time. There was a lot of pushback against 'Heartwork' from our own fans."

CARCASS's seventh studio album, "Torn Arteries", will be released on September 17 via Nuclear Blast Records. The LP title references an old demo created by original drummer Ken Owen back in the 1980s.

In 2019, CARCASS released its first single in over five years, "Under The Scalpel Blade", followed by a four-song EP titled "Despicable" (October 2020).

CARCASS's comeback album, 2013's "Surgical Steel", sold around 8,500 copies in the United States in its first week of release to debut at position No. 41 on The Billboard 200 chart.