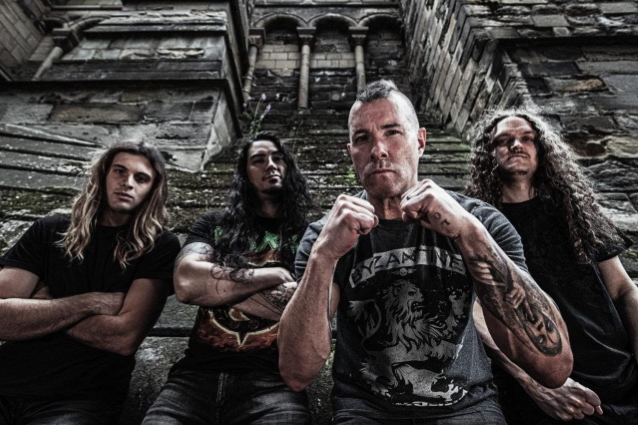 Dead Rhetoric: It feels like you are very inspired and these are exciting times for ANNIHILATOR — as "Ballistic, Sadistic" is the latest record. What would you say you set out to accomplish through this set of material — as there seem to be aspects that to these ears explore a feel and atmosphere of, say, "Never, Neverland"?

Jeff: "Yeah. There are a couple of aspects to that. We've had… as people can find out on the Internet or read magazines or listen to podcasts that want to find out about our band, they'll find a strange history to us. We can be kind of unknown and unsigned in some countries, like Canada and the United States, but all of a sudden you see us on YouTube playing in front of 80,000 people. It depends on where we are, what country, and where we are in the career sort of thing. People are, like, 'What the hell is going on with this band?'

"The thing is we've had kind of a comfortable European and Japanese story, where even though we are Canadian that's really the only places we've been going when you look at the career. This is our seventeenth studio record and a lot of people that are new to ANNIHILATOR or have only heard of the name but only heard 'Alice In Hell' or 'Never, Neverland' are, like, 'Huh? There was 15 records after that?' [Laughs]. So our North American and Canadian fans find out we have a zillion records out and when you do that many records, as a writer, you are going to hit and miss just like any bands. I've got albums by SLAYER, AC/DC and KISS — and I have all the CDs but I don't listen to them all, because some are classic, some are good and some I don't think are all that good. The same with my band or any band that's been doing this at this level for a long time, you can do good stuff and not so good stuff — and it's not your fault necessarily, but you can't get it right all of the time and it's hard to get things right most of the time.

"I went and said the last two ANNIHILATOR records started going up for us in Europe. Do I sign on and do another record like that the same way or do I take a chance and do something a little different? Not too crazy, going to do rap or try to change the band image, but just try something different. Because we can put out another record, maybe the albums sales only increase 10,000, or do I just try to do something fun at this point in my career and do something different? I asked my band members that had been with me for a while now to be honest and write down the top three things you think I should do to kick my ass and kick the ass of the record that's going to come out.

"And they said number one, write the album with a drummer. Because what I've been doing since 1993 is every record since then has been written with a drum machine or drum software. And some of those records later on were recorded with the drumming software — I didn't bother to get a drummer to do it; it was convenient and cost effective to do things this way. A lot of bands do that. So with Fabio [Alessandrini, drums] from Italy, he would come back up and we'd go over the material and write until we got what we needed. It's stunning to most people, but that's always the way we've done things — and that's going to give things a different sound and a different way of writing. The next thing — have that drummer actually record on the album. The third thing was don't go back in the hopes of copying or cloning old material because you are never going to pull it off and it's going to be obvious. Instead go back to a bit of the feeling of that. We went back and just had a lot of fun vibes from the songs — a new riff we would be writing would sound a lot like 'Stonewall', the format of the songs are similar. We didn't end up recreating part two of those albums, we clearly went back and tried to capture a bit of the early vibe. And that's it, it's going to be different and I don't know if it makes things better or worse in the end. People will like it or they won't. It's never going to be as classic as 'Never, Neverland', but it brings a lot of memories of that."

Dead Rhetoric: Where do you think you've made the greatest changes in your life from your early years of ANNIHILATOR to the current Jeff Waters?

Jeff: "I started off being very serious as a teenager in being in a band as the bands I loved. I wanted to get into the business, get a record deal, and write good music. To do that, was to focus day and night on this stuff. So, when I was a teenager into my early twenties, that's all I focused on — I tried not to work at a job, or finish school completely. I was one-hundred percent into this, and what I wanted to do. Almost no cigarettes, no girlfriends, not going out and partying, no socializing — this was all about staying in my room, writing music and watching videos of other bands and learning how they did things. I put my time in heavily with practicing and learning about everything I could.

"And then 'Alice In Hell'/ 'Never, Neverland' came out — and wow — girls, cigarettes, alcohol, I was enjoying the fruits of my labor. Right away when you get that thrown out at you, I didn't handle it. I became a full-time alcohol addict for about four years and that's the first time I actually quit was in 1992. I think only a couple of nights were the only nights I didn't have a large quantity of alcohol. That was a huge wake up and change and I fell off the wagon privately a few years later. By getting off alcohol, it helped me focus more and not be 70 years old, I keep my physical self in shape. I'm not at the end of my life here and I can make better business decisions. I'm enjoying life better. Just loving music and doing it for the right reasons."