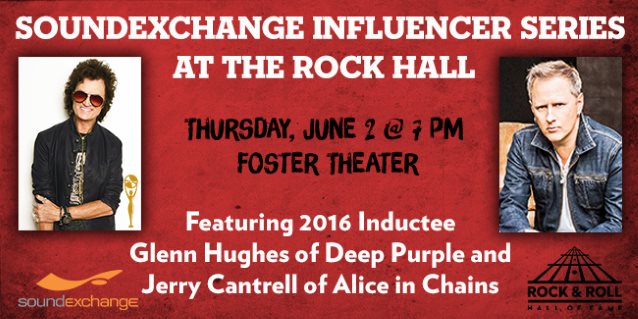 The "Influencers" series brings music legends together to discuss their influence over today's music and important issues facing the industry.

Glenn Hughes joined hard-rock legends DEEP PURPLE in 1973 following the departure of vocalist Ian Gillan and bass guitarist Roger Glover. The following year saw the release of "Burn" (featuring David Coverdale and Glenn Hughes on vocals),which has since been re-released on its 30th anniversary. This stunning album rejuvenated the band and stands tall among DEEP PURPLE classics.

In the halcyon days, PURPLE headlined at the famous California Jam in 1974 in front of quarter of a million people. After world tours via PURPLE's own jet plane, "The Starship," and two more studio albums, (the Hughes-influenced "Stormbringer" and "Come Taste The Band"),DEEP PURPLE finally split in 1976. In 2016, DEEP PURPLE (Ritchie Blackmore, David Coverdale, Rod Evans, Ian Gillan, Roger Glover, Glenn Hughes, Jon Lord, Ian Paice) was inducted into the Rock And Roll Hall Of Fame by METALLICA drummer Lars Ulrich. Glenn Hughes is currently at work on a new solo album, has a U.S. headline tour booked later this summer, and recently announced the return of BLACK COUNTRY COMMUNION (featuring Joe Bonamassa, Jason Bonham and Derek Sherinian).

Jerry Cantrell is most recognized as the lead guitarist, songwriter and vocalist for mega-platinum-selling rock band ALICE IN CHAINS. ALICE IN CHAINS' most recent release was the Grammy-nominated album "The Devil Put Dinosaurs Here", which entered Billboard's Top 200 at No. 2 and debuted at No. 1 on Billboard's Alternative Albums Chart. Rolling Stone gave the record three stars, as did USA Today, who praised it as an album of "undeniable power." Spin called it "an assured, diverse, heated record with galvanized hooks," Pitchfork said it's "as insistent as [landmark album] 'Dirt'," and the Seattle Times wrote, "Jerry Cantrell, William DuVall, Mike Inez and Sean Kinney continue to defy expectations" and that "ALICE IN CHAINS is better than ever."

Over the course of their remarkable career, ALICE IN CHAINS has garnered multiple Grammy nominations, sold more than 20 million albums worldwide and amassed a diehard international fanbase whose members number in the millions. They remain one of the most successful and influential American rock bands of all time.

The "SoundExchange Influencers" series provides a forum for music legends to discuss their impact on today's music and to address issues currently facing our music legends, namely, fair pay and recognition for all sound recordings across all mediums and all eras of music.