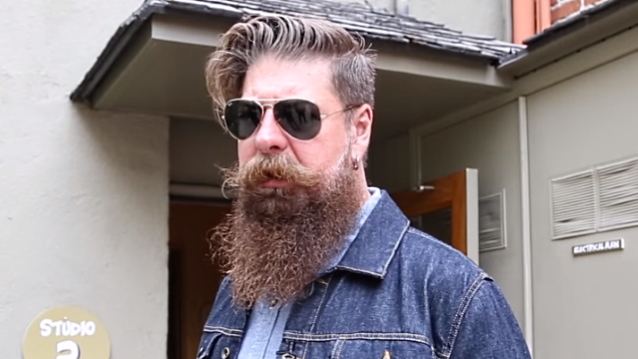 Jim Root says that his departure from STONE SOUR has been "a blessing."

The guitarist was dismissed from STONE SOUR at the end of 2013 — even as he and singer Corey Taylor were working together on a new SLIPKNOT album.

In a recent interview with HMV.com, Root said that he is far more content not having to split his time between the two groups.

"It's why I'm not in that band anymore," he said of STONE SOUR. "I was spreading myself too thin. That was making me unhappy and that, in turn, was making the rest of STONE SOUR unhappy. You can't evaluate your situation when you're in a band, not really. But it's been such a blessing, I can focus my energy on one band and I don't have to juggle anymore. It didn't work for me. Corey's different. He needs things to be 'go, go, go' all the time. I need time to decompress and to figure things out. I can't be on tour constantly if I really want to be creative."

At the time, Taylor addressed the issue as well, saying, "It was difficult, at first. It put a strain between he and I for a little bit. It was one of those things where the timing just sucked. But at the same time, we knew that, on both sides, we've gotta do what we've gotta do."

Four and a half years ago, STONE SOUR named guitarist Christian Martucci as the permanent replacement for Root. Martucci was recruited to play on the band's early 2014 tour tour and was confirmed as a permanent member in March 2015 in a Facebook post.