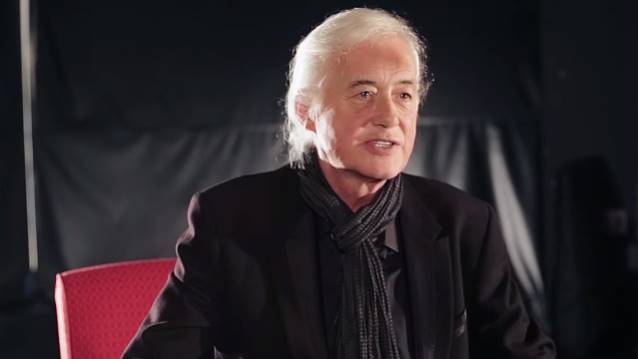 Legendary LED ZEPPELIN guitarist Jimmy Page spoke to Berklee College Of Music about performing with the band, how he learned music, influences on his sound and music, and being chosen for an honorary doctorate from Berklee College Of Music. The four-and-a-half-minute clip — which was filed by 21summit Productions — can be seen below.

Page told the audience he was overwhelmed by the performances of his songs at the previous night's concert, and decided the speech he prepared was useless. Speaking extemporaneously to the rapt audience, he winked and said he'd busk his speech. "What a spirit there is here," he began. "Music has so much power across so many avenues, to be in a position to do the thing you're best at, which is making music, and bringing joy and pleasure to other people, it can't be much better than that. I wish to pass that on to all of you. Congratulations with your degrees and lots of success in the future."

Video footage of Page's commencement address can be seen below.

Allen also shared about the concert, "Last night was just a revelation, to hear the diversity, the authority from which everyone performed, the passion, the love, and the pieces of music. I was just very touched." Adding, "You are all part of an incredible and far-reaching legacy. What we do is a privilege. Music is so much more than a job. You special people are given a chance to do what you love, and it is love for your art, which will sustain you through the unexpected twists and turns that will come. As you embark on your brilliant futures, always remember the passion you've discovered."

Memory's message to the students was direct and sharp, a piece of wisdom from a seasoned educator. "You can't keep it unless you give it away. Start giving it away as soon as you walk out this door. Rehearsal every day is the answer. If you rehearse every day you have nothing to worry about."

"This is such a joyous day," said Simpson, upon receiving her honorary doctorate. "I am so over the moon for each and every one of you. The music last night filled me up to such a degree. You stirred me up. You made me move. I was just thinking of what Mr. Memory said about 'always rehearse.' I'm gonna go a step further and say, 'stay in performance mode.' This is not a rehearsal anymore. You are performing all the time. Give it your all. Give it everything. You never know who's watching, whose going to be listening. Go full throttle! I am so proud of you. Your future is so bright. Carry on y'all!"

The annual commencement concert at the Agganis Arena featured some of the college's most accomplished students paying tribute to the honorees with performances of music associated with their careers. Three of the honorees took to the stage during the event. Simpson brought the audience to its feet with her hit "I'm Every Woman". Memory joined students for performances of his compositions "Blues for Warren" and "Black Spaniard". Allen joined with Berklee professor Terri Lyne Carrington for her tune "Our Lady", and with Simpson for the songwriter's "I Don't Need No Doctor". From his seat, Page beamed and nodded his head approvingly after renderings and rearrangements of "Kashmir", and "The Ocean", and a guitar medley that included solos and riffs from "How Many More Times", "Heartbreaker", "Dazed and Confused", "Whole Lotta Love" and "Stairway to Heaven", among others.

Berklee's class of 2014 graduated with bachelor of music degrees or professional diplomas. Female graduates numbered 287, representing 32% of the total class. International students from 66 countries made up 32% of the class. The largest number of graduates from outside the U.S. were from South Korea and Canada. Students from as far away as Ghana, Mozambique, Japan, Russia, and the Philippines were among the graduating class. Domestic students were from 45 states. The top three majors were professional music, music business/management and performance. Voice, guitar and piano were the three most common instruments among the graduates.

Berklee College Of Music was founded on the revolutionary principle that the best way to prepare students for careers in music is through the study and practice of contemporary music. For more than 65 years, the college has evolved to reflect the current state of the music industry, leading the way with baccalaureate studies in performance, music business/management, songwriting, music therapy, film scoring, and more. With a focus on global learning, Berklee in Valencia, a new campus in Spain, is hosting the college's first graduate programs, while Berklee Online serves distance learners worldwide with extension classes and degree-granting programs. The Berklee City Music Network provides after-school programming for underserved teens in 45 locations throughout the U.S. and Canada. With a student body representing nearly 100 countries and alumni and faculty that have won more than 310 Grammy and Latin Grammy Awards, Berklee is the world's premier learning lab for the music of today — and tomorrow.