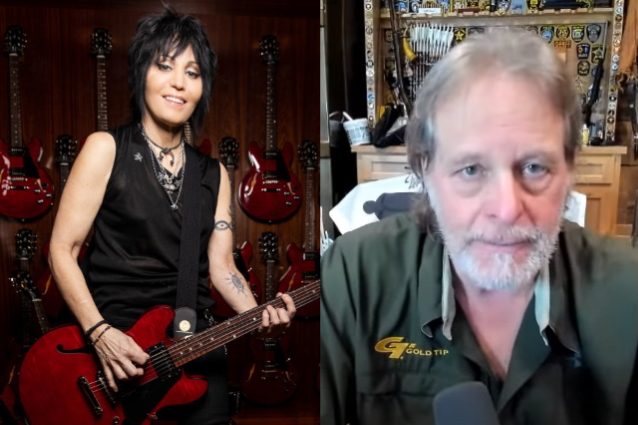 JOAN JETT Fires Back At TED NUGENT: He 'Has To Live With Being TED NUGENT, So That's Punishment Enough'

Joan Jett has fired back at Ted Nugent over his recent criticism of Rolling Stone magazine for including Jett on its list of "100 Greatest Guitarists".

In December, the 73-year-old rocker, whose recent time in the spotlight has been more for his political views than his music, railed against Jett's appearance on the list during his YouTube livestream. He said: "How do you list the top 100 guitar players and not list Derek St. Holmes? How do you do that? You do that by lying. The same way you get Grandmaster Flash in the Rock And Roll Hall Of Fame. You do that by lying. You have to be a liar. You have to have shit for brains and you have to be a soulless, soulless prick to put Joan Jett… [I] love Joan. Some of my greatest memories include lesbians. I love the lesbians; it's a cocktail of wonderment. [I] love Joan Jett — 'put another dime in the jukebox, baby'; great rock and roller — but as a top 100 guitar player, but you don't list Rickey Medlocke [LYNYRD SKYNYRD] or Dave Amato [REO SPEEDWAGON]. Really? Or Dick Wagner? Dick Wagner and THE FROST from Detroit. Or Mark Farner? Mark Farner from GRAND FUNK RAILROAD. Joan Jett is on the list but not Mark Farner? Grandmaster Flash is in the Rock And Roll Hall Of Fame but not GRAND FUNK RAILROAD? [Laughs]

"By the way, if Grandmaster Flash is in the Rock And Roll Hall Of Fame and Joan Jett is on the list of top 100 guitar players, then I'm Caitlyn Jenner's boy toy," he concluded.

After Nugent was widely criticized for singling out Jett as someone who didn't deserve to be on the Rolling Stone list, he doubled down on his comments during an interview with Dave Spuria of The Real Music Observer. Addressing the negative feedback he received for his remarks, he said: "I started off by praising Joan Jett's genuine shitkicker, down-to-earth, all-American rock and roll credentials. I started off by praising her. I even saluted the lesbian thing.

"Here's the question: how on God's good green earth could someone listen to what I say and then claim it's about hate and about knocking and belittling? Joan's awesome. I mean, THE RUNAWAYS. Her whole, 'Put another dime in the jukebox, baby.' I mean, she's the real rock and roll McCoy. But belonging on the 'top 100 guitar player' list anywhere on planet earth, even 'Boring' Stone before genuine virtuosos of the six-string? That was my statement. I was only using Joan as an example because she happens to be a perfect one."

Addressing Spuria directly, Nugent continued: "I think I can tell that you are a real music lover — you love spirit and soul, defiance, middle fingers on fire, genuine musical authority, all that combination that represents that dynamic and majestic soundtrack to our lives, our American Dream, and if there is a German or a Spanish Dream, I hope they get a soundtrack as well. But Joan Jett represents that. But on the top 100 guitar players list, before Tommy Shaw [STYX], before Rickey Medlocke and before Derek St. Holmes — I can go on with a hundred examples… I was only using that beautiful young lady as an example, and people literally went berserk trying to twist it into hate.

"There was no hate," Ted added. "I don't have any hate. I had my hate amputated when I was five years old. No hate — all love and compassion and honesty. That's what drives people crazy: my honesty."

Jett addressed Nugent's comments in a brand new interview with NME. After the reporter brought up the fact that Ted insisted that Joan didn't deserve to be on the list, she countered: "Neither should he. Is that his implication, that he should be on the list instead of me? Well, that's just typical — it's what I've dealt with my whole life, being written off. Ted Nugent has to live with being Ted Nugent. He has to be in that body, so that's punishment enough."

After a brief pause, she added: "He's not a tough guy. He plays tough guy, but this is the guy who shit his pants — literally — so he didn't have to go in the Army." She then summoned her longtime manager Kenny Laguna to "help," imploring Laguna to relay the full tale of Nugent's supposed Vietnam War draft-dodging tactic (which the alleged pant-shitter himself shared with High Times magazine in 1977 and later retracted).

"So this," Jett concluded, "is the tough guy who's running around America, stirring things up against each other."

Nugent's December 2021 comments weren't the first time he had been critical of Rolling Stone editor David Fricke's choices for "100 Greatest Guitarists". Four years ago, he said that he hasn't gotten the recognition that he deserves as a guitar player, explaining: "This isn't ego. I have an ego, because I have self-esteem, because I put my heart and soul into being the best that I can be. If you run a race and your chest breaks the ribbon and you've won the race, I think you can look in the camera and go, 'Man, I'm fast. Man, I ran good.' I think that should be celebrated. Excellence should always be celebrated. But remember, those people in the musical [sic] industry who make those decisions about who's best and who is in the Rock And Roll Hall Of Fame, they hate me because I'm against dope. And I am against dope. I don't think it's good. I don't want my sons and daughters, I don't want my grandkids, I don't want my pilots, I don't want my band, I don't want my crew stoned. I don't want them comfortably numb. I don't wanna have to wake 'em up three times to get to the gig. I don't wanna have to remind 'em how the song goes. I've had this all my life. And these people in charge of deciding this, they don't like me because I'm on the board of directors with the highest votes for 25 years on the National Rifle Association. They somehow blame inanimate tools on crime."