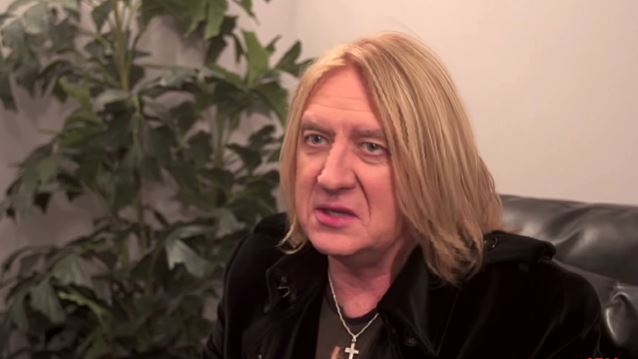 JOE ELLIOTT On Upcoming DEF LEPPARD Album: 'Every Song Is Different From Every Other Song'

A behind-the-scenes interview with DEF LEPPARD singer Joe Elliott filmed during his recent appearance on VH1 Classic's "That Metal Show" can be seen below.

Speaking about the musical direction of DEF LEPPARD's new album, which is due in the fall, Elliott said: "It's all over the place. Stylistically wise… I can't really pinpoint, because every song is different from every other song. We've always aimed at that. We hit it for the first time on 'Hysteria', where we'd done an album that allowed us to go in any direction we wanted to; it wasn't just purely hard rock or metal. There was pop, there was ballady stuff. There was… everything other than acoustic; we didn't have that covered at the time, but we did a [few] years later with 'Two Steps Behind'."

He continued: "There's some real classic LEPPARD-sounding stuff on the new album, but there's also some stuff that a band that's of our standing — basically, in our 50s — should be doing, which is a little bit more… I don't wanna say grownup, 'cause that makes it sound boring, but a little bit more… organic, I think is probably the best way to put it. We've allowed our roots, or the music that we were steeped in of other people, to soak into our music a little bit more. So whereas you can listen to a [LED] ZEPPELIN album and go, 'I can hear a little bit of Muddy Waters in there,' or a little bit of this, that and the other. You'll be able to say, 'That sounds a little bit like…' because we've been honest enough to just say, 'Well, if it sounds a bit like… This song sounds like LED ZEPPELIN,' or, 'This song sounds like QUEEN,' then that's us, that's 'cause we always did. But we weren't trying to disguise everything too much; we just let it breathe and just be natural. So it's a very mixed bag of songs. There's fifteen of them on the go. I don't know how many of them will make the album, but I'm hoping most of them will, because they're all very different from each other and very representative of who we are right now."

A recent advertisement for DEF LEPPARD's upcoming U.K. tour with WHITESNAKE revealed that DEF LEPPARD's eleventh album will be a self-titled affair.

DEF LEPPARD returned to the road on April 15 for a Canadian tour, followed by Europe in May and June. A U.S. tour with STYX and TESLA will kick off June 23 in Tampa, Florida.