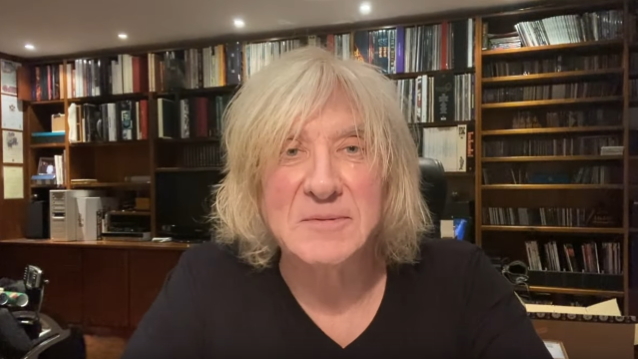 During an appearance on the latest installment of 95.5 KLOS's "New & Approved" music series, DEF LEPPARD singer and founding member Joe Elliott was asked what it was like to join surviving members of QUEEN, along with Ian Hunter, David Bowie and Mick Ronson, for a performance of "All The Young Dudes" at the Freddie Mercury tribute concert in April 1992 at Wembley Stadium in London, England. Joe said (as transcribed by BLABBERMOUTH.NET): "With the greatest of respect to everything that this band has done, it has to be one of the best three or four minutes of my life on stage — was getting up to do that number, for various different reasons. We were celebrating the life and times of Freddie Mercury, bringing AIDS awareness to the world. We were No. 1 all over the world with 'Adrenalize' and 'Let's Get Rocked' at the time of that concert. And so many of our musical heroes were there. Obviosly, the remaining members of QUEEN. Tony Iommi played rhythm guitar with Brian [May, QUEEN guitarist] nearly the entire set — Tony from BLACK SABBATH. And you're looking at all the different singers that were there — Roger Daltrey, Robert Plant. And the bands that performed — like GN'R [GUNS N' ROSES] [and] ourselves — it was an incredible moment. But to see everybody that meant anything to us as a collective band or us as individuals, being on stage doing the anthem of our generation, as far as I'm concerned, was just unbelievable. You're looking at, as I said, the remaining members of QUEEN, with Mick Ronson on guitar, David Bowie playing the sax and Ian Hunter singing. It was one of those moments where Brian said, 'You're gonna get up and do the backing vocals?' And I said, 'You try stopping me.' And I remember I grabbed Phil [Collen, DEF LEPPARD guitarist]. Phil was a little reluctant at first. I said, 'If you don't do this, you're gonna regret this for the rest of your life.' And I almost kind of kidnapped him, dragged him on with me. So the two of us were shadowing on either side of Brian May and singing with this guy that had become a lifelong friend of ours a decade earlier anyway. And it was a just a magical moment; it can't be replicated. I can do some amazing things from now till the day that we don't do this anymore, and we have done some amazing things starting back in 1979. But that four minutes was the cherry on top of an immense cake. It was just phenomenal. Even now thinking about it, the hairs on my arms are getting all weird. It's just a fantastic thing that we were in the right place at the right time. It's nothing to do with us. That song was, obviously, chosen by, I would imagine, Brian and Roger [Taylor, QUEEN drummer], who would have been the two who had more say than anybody else."

He continued: "The only band QUEEN ever opened for was MOTT [THE HOOPLE]. So there's a connection there with MOTT. They said that they learned a lot of their craft watching MOTT every night. So there's a love and a respect between QUEEN and MOTT THE HOOPLE. So when they were doing their thing, to break ranks and actually do a non-QUEEN song, the only two people they did that with, I think, was Bowie and Ian. It was a magnificent thing. And when we got wind of the fact that they were gonna do that, it was, like, 'Wow! Bowie, Hunter, Ronson and QUEEN doing 'Dudes' for a billion and a half people on TV and 90 thousand people in the stadium. I gotta be a part of this. It's history in the making.' It was coattail riding to the greatest extent. But I'm glad I did."

Elliott added: "That song has always been in our periphery. Everybody knows it's my favorite song. We've done it with Ian, and it's on this [latest DEF LEPPARD] box set. We did it at the Rock And Roll Hall Of Fame with Ian and a plethora of special guests — Susanna [Hoffs] from THE BANGLES, Little Steven [Van Zandt] from Bruce Springsteen's band, Colin Blunstone and Rod Argent from THE ZOMBIES and Phil Manzanera from ROXY MUSIC all wanted to get up and do it. That song also resonated with them. They weren't necessarily [up there] because they were big DEF LEPPARD fans; they were big fans of the song. And it was, like, 'Yeah, we'll do it. That'd be great.' What an honor to share the stage with them as well all those years later."

Last month, DEF LEPPARD released "Def Leppard - Volume Three", a new limited-edition box set, via UMe/Virgin. This set marks the third of four volumes of the band's complete recorded output in both 180-gram vinyl and limited-edition CD box sets. They contain all the recordings from the band in the 2000s and features the original packaging on both formats.

The albums were mastered by Ronan McHugh and Joe Elliott at Joe's Garage with assistance from Andy Pearce and cut by Greg Moore. Housed in rigid boxes the sets also contain a hard-backed book with rare photos by Ross Halfin and notes by Classic Rock magazine's Paul Elliott. Band members Joe Elliott, Rick Savage, Rick Allen and Phil Collen have also contributed to the set.

"Def Leppard - Volume Three" features 2002's "X", which was the group's sixth consecutive Top 20 record on the Billboard 200 chart and features songs such as "Now", "Four Letter Word" and "Long Long Way To Go", 2006's "Yeah!", the band's first covers album featuring a collection of the groups favorite tracks re-recorded with the iconic LEPPARD sound, this is the first time this album will be available on vinyl. Also DEF LEPPARD's tenth studio album "Songs From The Sparkle Lounge", released in 2008 the record marked the band's return to their signature sound and hitting the Top 10 both sides of the Atlantic, the album included the hit single "Nine Lives" which featured Grammy Award-winning country legend Tim McGraw.

Also included are "B-Sides", "Yeah! Studio Covers" and "Yeah! Live". These albums have specially been compiled by Joe Elliott for this limited-edition release. "B-Sides" contains a rare compilation of B-sides that have never appeared on vinyl before. "Yeah! Studio Covers" includes some never-before-released on vinyl covers, "Yeah!" bonus disc exclusive release tracks and a compilation of the various covers recorded by the band over their career. "Yeah! Live" is a compilation of live recordings of covers by the band which include both tracks from 2006's "Yeah!" , as well as previously unreleased live tracks from the past 30 years.