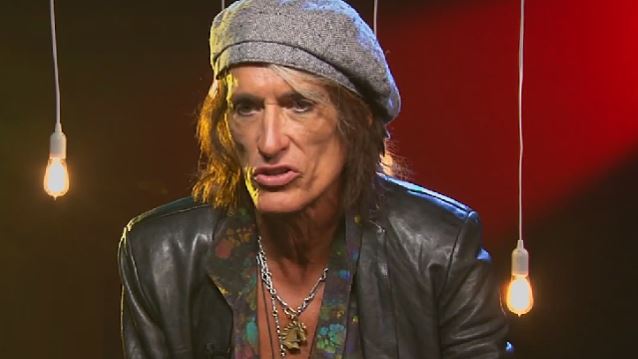 In a brand new interview with The Arizona Republic, AEROSMITH guitarist Joe Perry was asked if there has been any talk of the band working on the follow-up to 2012's "Music From Another Dimension!". He responded: "Back, say, 10 or 20 years ago, it seemed we had a lot more time to fool with. And at this point, we want to take advantage of every minute we have where the band can still get together and play. But then there's also other things we want to do. We all have lives outside the band. So we want to balance that off. It always amazes me that the band is still together and it's still the five of us. So we're always talking about what we're going to do with this two or three months or that bunch of time."

He continued: "I know Steven [Tyler, vocals] is finally getting to work on his solo project he's been talking about doing forever. So I'm really glad he's got that going on. And there's a couple projects I've been toying with that look like they're gonna happen. But somewhere in there, I'd love to get in the studio with the guys and just blow to see if we can come up with some new stuff. I do know that we'll be touring at the beginning of next year and then taking some more time off, at least from touring, so that opens up some space for another stint in the studio. It's always on our minds. But like I said, everybody's probably got a short list of things they want to do."

AEROSMITH bassist Tom Hamilton recently revealed that there are some unreleased songs that have been recorded over the years that may one day officially see the light of day.

"It's funny, we have a pretty much an album's worth of that that I think has just been gradually posted over the last 20 years on the Internet," he said. "It has some … songs that we were really looking forward to using … great songs. They had a really good one called 'Meltdown', and a really great one called 'Diamond Dance Romance'. Some nice ethereal stuff.

"Over the years it just wound up getting ... People were making an extra copy for themselves at the studio. Now you can find it online. I would love to continue digging into that material."

"Music From Another Dimension!" debuted at No. 5 on The Billboard 200 album chart, selling 63,000 copies in its first week of release.