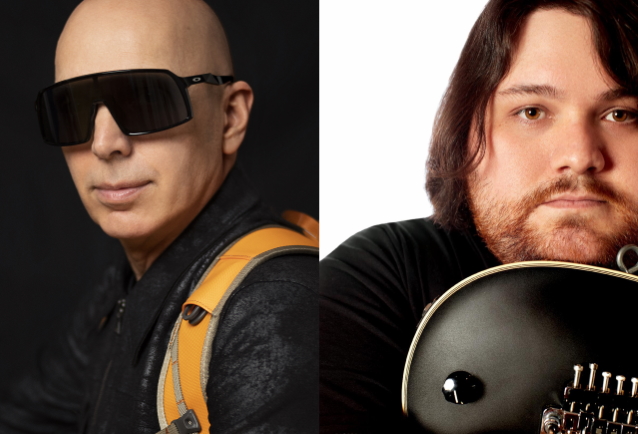 Satriani, who was in talks with Alex Van Halen and David Lee Roth to be the guitarist for a tribute event, told Ultimate Classic Rock in a new interview that Wolfgang is a "more natural" choice to play Eddie Van Halen's parts than anyone else. He made his comments just weeks after Wolfgang performed his late father's songs at the recent Taylor Hawkins tribute concerts. The son of Eddie Van Halen played three VAN HALEN songs — "On Fire", "Hot For Teacher" and "Panama" — over the course of two concerts in September alongside Dave Grohl on bass, Josh Freese on drums and THE DARKNESS's Justin Hawkins on vocals.

"When I saw Wolfgang playing at the Taylor Hawkins benefit, I thought it was the most natural, beautiful thing I'd seen in a long time," Satriani said. "It was such a wonderful thing to see him play his dad's music like that, and he's such an incredible musician. I thought, 'Well, if the thing is ever gonna happen, he should do it.' It just seemed more natural than reaching out to somebody like me.

"So, the world should just wait for him to make up his mind how he wants to do it, and we should leave him alone, let him figure out the best time and place for it," the guitarist continued. "Whatever he comes up with will be the best way to do it, I think."

Satriani who played with former VAN HALEN members Sammy Hagar and Michael Anthony in CHICKENFOOT, admitted that he had some trepidations about signing on for a VAN HALEN tribute concert.

"I jokingly told [Alex and Dave] on that first phone call that if I had half a brain I'd hang up right away and not accept such a crazy offer, 'cause nobody can replace Eddie, and whoever tries to do it is gonna get a whole lot of negativity from the world of social media," he said. "But I heard myself saying 'yes' before my better judgment kicked in, because I am such a fan of Eddie and his work, and I thought, 'Wow, it would be such a great labor of love to dive into that and try to understand the essence what he was doing for each song.'"

Earlier this month, Wolfgang said that he is "super happy and proud" of the fact that he performed his late father's songs at the Taylor Hawkins tribute concerts. Wolfgang told Guitar World's Chris Gill: "I didn't even know if I could do it. I had a lot of conversations with Dave. What a kind sweetheart of a man he is. We talked a lot about [it]. Initially he was, like, 'What do you think? Would you be comfortable doing this?' Initially, I didn't wanna disappoint Dave Grohl. And I was, like, 'Sure.' And he was, like, 'Why don't you think about it and get back to me?' And so I did. I thought a lot about it and I was, like, 'You know what? If there was ever a time, this is it.' I talked to him about it and I was just honest. I was, like, 'I don't know If I could do this, but if I do, I need your support. I need you up there with me.' I was like, 'Whatever the incarnation of what it becomes, I need you there with me.' And he was, like, 'Absolutely.'"

Wolfgang also responded to those people who have suggested he has an easier time playing the classic VAN HALEN songs because he is the son of Eddie Van Halen. "I didn't just put a CD in and upload it into my head," he laughed. "I practice a lot. It's a really weird backhanded compliment, where it's, like, 'Oh, you did nothing to be able to do this.' And it's like, 'No, I work very hard to be able to do what I can do.' I understand where it's coming from, though."

This past summer, Wolfgang spoke to Rolling Stone magazine about why he is adamant about not playing VAN HALEN covers when touring with his own band MAMMOTH WVH.