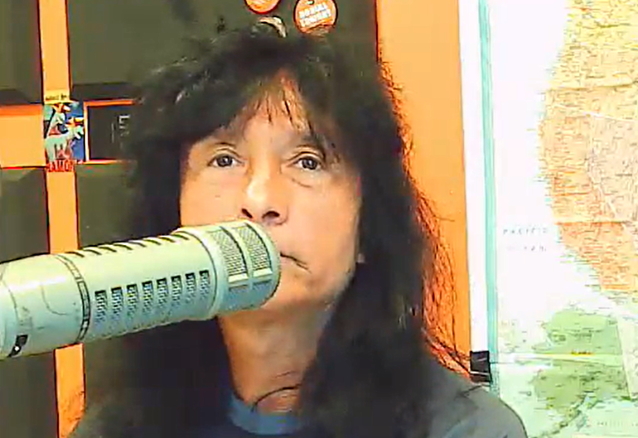 JOEY BELLADONNA Looks Back On ANTHRAX's 'Married With Children' Appearance: 'It Was A Blast'

ANTHRAX singer Joey Belladonna spoke to Syracuse, New York's classic rock radio station TK99 about the time he and his bandmates were asked to co-star on an episode of the groundbreaking TV sitcom "Married With Children", a show that happened to be a favorite of all the ANTHRAX members. The episode was titled "My Dinner With Anthrax", and the band spent a week with the Bundy family at the iconic Sunset-Gower Studios in the heart of Hollywood, learning their lines, rehearsing and shooting the episode — and getting into a little hot water with the show's producers when they took "Bud Bundy" (David Faustino) to see METALLICA.

You can watch video of Belladonna's interview with TK99 below.

This past February, ANTHRAX drummer Charlie Benante said that the band's appearance on "Married With Children" was "one of the highlights" of his career. "On the last day we filmed the show, we actually did two," he said. "We thought the first one went great, the audience laughed a lot and we all hit our marks. The writers and producers came down and decided to change some of our linesThere was a different rhythm now, but the new lines were funnier."

A synopsis of the "My Dinner With Anthrax" episode, which originally aired March 1992, reads as follows: "It's Al and Peg's 20th anniversary, and Peggy wants only one thing from Al... Meanwhile Kelly and Bud win the 'My Dinner With Anthrax' contest, which means a house party with the thrash-metal band, but there will be no party unless they get rid of mom and dad first. The answer: tricking them into taking a Florida 'vacation' that turns out to be a time-share sales scam where the salesman won't leave them alone." Each member of ANTHRAX had a couple of lines to say in the show and the band performed "In My World".