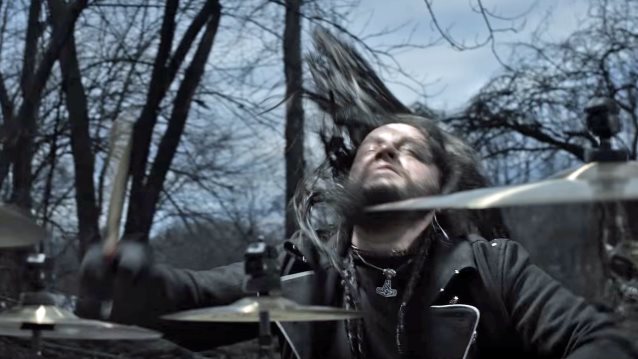 JOEY JORDISON: METALLICA's LARS ULRICH 'Is Probably One Of The Best And Most Innovative Drummers Ever'

Regarding Ulrich, Jordison said: "A lot of people give this guy shit, but they need to shut their fucking mouths because Lars Ulrich is probably one of the best and most innovative drummers ever. I got to tour with the guy and I watched him play every night from behind the kit, and his double bass was completely on point. He's also one of the best businessmen that keeps this type of music going; he's the heart of the whole fucking community, because METALLICA are the kings. There'll never be anybody that will match them, and Lars is a huge, huge part of that. Without that guy, and the influence of that band, I wouldn't even be sitting here talking to you. Lars is one of my gods and he always will be. That guy fucking rules, period. So when I got the call asking if I'd fill in for him at Download festival [in the U.K.], of course I knew everything because he's one of my hugest influences. I remember playing to his shit all the time growing up and trying to be as good as him. Our technical abilities are way different but I'll still never be as good as that guy, and getting to sit in his stool was one of the biggest fucking dreams come true. What an honor. I love that dude."

On the topic of Benante, Jordison said: "I grew up listening to ANTHRAX, and Charlie Benante is still on fucking fire. Most people can't catch up to that dude; he is absolutely on point at all times. I busted my ass trying to learn the double bass parts to 'A Skeleton In The Closet' as a kid, and I'd drive my parents crazy playing it over and over again trying to catch up to his speed. He's hugely responsible for training me while I was growing up, and he's absolutely one of my biggest heroes of all time. And he still looks fucking good and he's still in great shape, and he's playing better than ever right now. I was listening to 'Among The Living' in 1987 when I was in seventh grade, and I'm fucking 40 now and he still rules. That's what I call influence; people like that do not lose the fire, man."

Joey was also full of praise for Lombardo. "Dave Lombardo is the fucking master," he said. "I've said this in a couple of interviews, but in 1986 all I wanted was SLAYER's 'Reign In Blood', and I got it in my fucking Easter basket — that's how cool my parents were. Now, that record is the best fucking speed metal/thrash metal hybrid of all time. It will never be beaten, period. Lombardo is the fucking speed metal god of drums. He will never be matched. His intensity still to this day blows my mind. I got to tour with the guy, and not only that but he's one of my fucking friends now, and he's one of the sweetest guys on earth. And the reason he can play the way he does is because he has no ego. He goes up on stage and he becomes the drums; he doesn't play the drums, he is the drums. He's my ultimate influence as far as this type of music goes. FANTÔMAS are the ultimate supergroup, too. When I first heard about them I was like, 'That's my dream band right there. Mike Patton, Buzz Osbourne, Trevor Dunn and Dave Lombardo; it doesn't get any better than that.' I watched them play live at The Troubadour [legendary nightclub in West Hollywood, California] when we were making the first SLIPKNOT record, and I can't even put into words what I saw that night. It was the most insane fucking show I've ever seen; it was magic. You always see one show in your life that you think, ‘I wish I could go back and relive that', and that's the show I wish I could go back and see, at The Troubadour in 1998. Of course I've seen SLAYER live a bunch of times, and SLAYER are one of my favourite bands of all time, but that FANTÔMAS gig showed me that no one can touch that man. So Lombardo is my ultimate drum hero."

Jordison was a founding member of SLIPKNOT and one of its main songwriters for 18 years.

His new band, called VIMIC, will release its debut album, "Open Your Omen", later in the year.