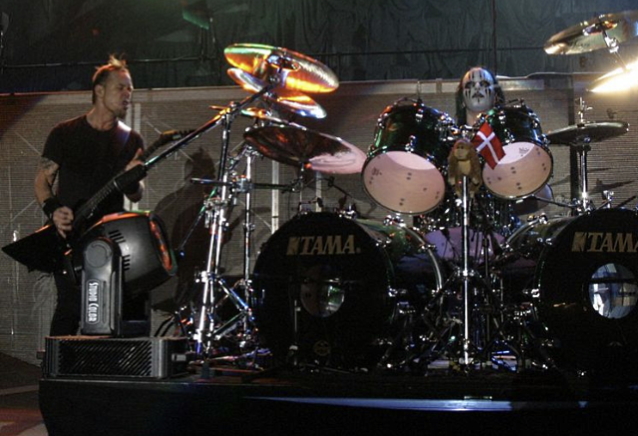 SLIPKNOT's Joey Jordison and SLAYER's Dave Lombardo filled in for METALLICA drummer Lars Ulrich when he was unable to appear at the Download festival in England in June 2004. Ulrich later blamed his non-appearance on exhaustion, caused by an unrelenting tour schedule and the break-up of his seven-year marriage to Skylar Satenstein.

SLIPKNOT singer Corey Taylor reflected on Jordison's performance with METALLICA during a conversation with Knotfest.com's Ryan J. Downey. He said (as transcribed by BLABBERMOUTH.NET): "We were back there with [Joey], watching it… It was so surreal to watch Joey playing with [METALLICA], because we all grew up listening to them. And Joey was shitting bricks. I mean, he [had] his mask on, but every time he'd come back and he would pull his mask off, he would just be, like, 'How am I doing? How am I doing?' I'm, like, 'You're fucking killing it.' Me, Paul [Gray, then-SLIPKNOT bassist], Clown [SLIPKNOT percussionist], we were all standing there fucking cheering him on. And they ended up throwing different songs at him that they hadn't rehearsed. They threw all the MISFITS shit at him, and he fucking knew it. They would have probably kept him up there all night if they could have. He played the majority of the set.

"That, to me, was such a fucking amazing moment for him that it was cool to be back there sharing that with him," Corey continued. "It was a special little fucking — almost like that's the moment you know you've made it. You're seeing this reflection of respect from arguably your biggest influence, your biggest peer. Them signing off on you like that had to have been fucking massive for him. And I remember him telling me it was such a blur that he didn't really remember anything until he watched the video back. And he's right — that shit can go by [very quickly] because you're so fucking into it…

"I don't know if they expected it, but he fucking went in there and he showed not only the band but all of their fans — not only the level of respect that we have for them and the music but that we can hold our own," Taylor aded. "And I think that was a big moment. It was a big part of that."

Jordison reflected on the moment years later. "As cool as it was playing that show, what was cooler was playing in METALLICA's practice room," he said. "It was just me and those three guys, just warming up. What a dream come true, man. I'll have dreams about it every once in a while. It was one of the best gigs of my life."