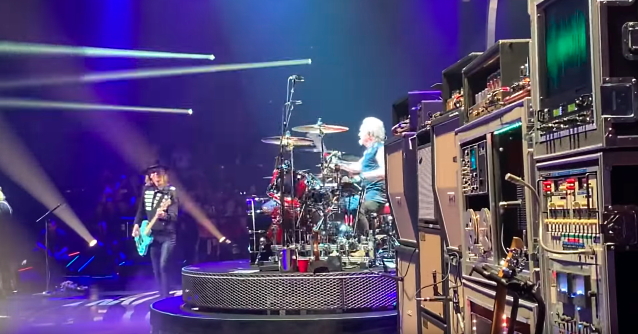 The drummer played drums with Steven Tyler, Joe Perry, Tom Hamilton and Brad Whitford at the Park Theater in Vegas, which is where their residency shows are currently being held.

After a short film summing up AEROSMITH's career was shown on the screen, the curtain rose, with Tyler announcing, "On the drums, Mr. Joey Kramer," to cheers from the audience.

Several fan-filmed video clips of last night's concert can be seen below.

Kramer sued the rest of AEROSMITH last month in a bid to perform with this bandmates at two Grammy-related events. But a Massachusetts judge eventually ruled against him and the group played without Kramer.

After Kramer injured his shoulder last year, his drum tech filled in for a few gigs during AEROSMITH's residency. Kramer did, however, perform with the rest of AEROSMITH in July at the Twin Cities Summer Jam in Shakopee.

AEROSMITH has two more residency shows scheduled for this month.

Tyler, Perry, Hamilton and Whitford later responded to Kramer's suit in a statement to People, saying Joey "has not been emotionally and physically able to perform with the band, by his own admission, for the last 6 months. We have missed him and have encouraged him to rejoin us to play many times but apparently he has not felt ready to do so. Joey has now waited until the last moment to accept our invitation, when we unfortunately have no time for necessary rehearsals during Grammys week. We would be doing a disservice to him, to ourselves and to our fans to have him play without adequate time to prepare and rehearse."