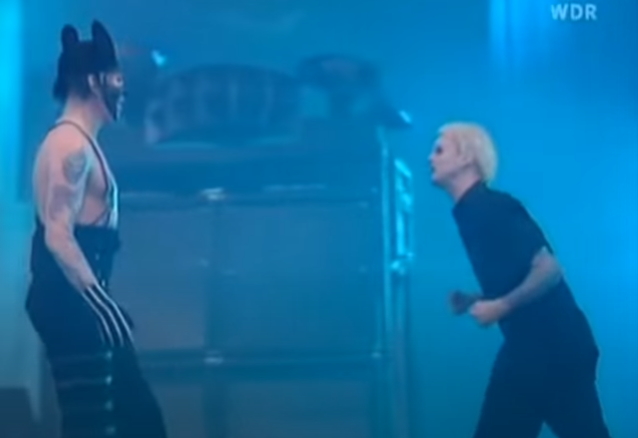 During an appearance on Monday's (April 11) episode of SiriusXM's "Trunk Nation With Eddie Trunk", John 5 reflected on the infamous 2003 video (see below) of the former MARILYN MANSON guitarist throwing down his guitar on stage and pushing the shock rocker after he kicks John 5 in the chest during a live performance of "The Beautiful People" at the Rock Am Ring festival in Germany.

"What happened was my sister passed away, my sister died unexpectedly," John 5 explained (as transcribed by BLABBERMOUTH.NET). "And I was shocked. I was in Europe and I was coming down the stairs, off a stage after a concert, and they told me my sister died. And I was in a state of shock; you just go into a state of shock. And here's the strange thing that happened to me: I didn't sleep for days and days and days. It was the strangest thing. I just wasn't tired. And I remember going to the bandmembers' rooms, going, 'I can't sleep. I just can't sleep. I haven't slept in now two days' or blah blah blah.

"So anyways, fast forward to the [Rock Am Ring] show. Now, what Manson did, that happened all the time," John 5 continued. "He didn't do anything wrong. I just snapped. It was weird. I went nuts. I didn't even remember. I just snapped. And I feel terrible watching it now because it really was my fault. You can't really hear what he's saying, obviously, but he's saying, 'Pick up your guitar.' 'Cause it looks like he's going, 'Come on. Come on.' But he's saying, 'Pick up your guitar. Pick up your guitar,' because he knew what was going on. And I feel horrible about it. But it was just a bad situation at that time… It was terrible because he was so nice during that time and all that stuff. I was in such a weird place, and it was just a bad time. I don't even remember it happening. It was just terrible."

After John 5 left Manson's band in 2004, he dismissed the idea that his departure was fraught with friction. "What actually happened was, at the end of the tour, we were just on different roads," he explained to ElectricBasement.com at the time. "It was completely amicable. He just wanted to write with other members of the band, and I wanted to do other things."

JOHN 5 AND THE CREATURES will embark on the "Sinner" tour next week. The band consists of John 5 on guitar, Ian Ross on bass and drummer Alex Mercado. Opening 15 of the 27 stops are THE HAXANS, the spooky rock duo featuring NEW YEARS DAY frontwoman Ash Costello and ROB ZOMBIE bassist Piggy D.JOHN 5 AND THE CREATURES will support FOZZY on some dates.

John 5 shares: "I am so happy and excited to get out there on the road. It's one of my favorite things to do in life and I am excited to see all the familiar faces. I can't wait to play some new songs off the 'Sinner' album and travel the country. It truly is going to be an amazing year."

JOHN 5 AND THE CREATURES will be recording shows along the "Sinner" tour for a live album and video, with San Francisco and New York dates confirmed for the recordings so far.

John 5 has worked with a varied range of artists, performing as guitarist for some of the biggest headlining rock bands in the world such as ROB ZOMBIE and MARILYN MANSON, as well as playing session with Paul Stanley, Rod Stewart, LYNYRD SKYNYRD and more. Slash has called John 5, "one of the most mind-blowing guitarists around" and Rob Zombie has dubbed him "a fucking shredder". John 5 has released seven solo albums to date, as well as a remix album, and has written music for the likes of MÖTLEY CRÜE, Steve Perry, Ricky Martin and others.

In 2015, following a series of web shows to celebrate the release of his solo album "Careful With That Axe", John 5 decided to take his solo set on tour and formed THE CREATURES band to support his live shows. Initially joined by long-term friend Rodger Carter on drums, the band continues touring to this day, and now work as a unit on 5's solo albums, including "Season Of The Witch", the live album "It's Alive", "Invasion" and 2021's "Sinner".