JOHN 5 To Be Joined By NIKKI SIXX, SEBASTIAN BACH, SCOTT IAN For 'Shout At The Devil' Performance At Whisky A Go Go

Former MARILYN MANSON and current ROB ZOMBIE guitarist John 5 will be joined by Nikki Sixx (MÖTLEY CRÜE),Scott Ian (ANTHRAX) and Sebastian Bach (SKID ROW) for a performance of the MÖTLEY CRÜE classic "Shout At The Devil" on April 6 at the Whisky A Go Go in West Hollywood, California.

John 5 revealed the "special guests" for the Whisky show during a recent interview with the "Iron City Rocks" podcast. He said (hear audio below): "I'm having a very, very, very special show at the Whisky A Go Go. Oh my God! This is gonna be insane. With some special guest stars… I guess I can talk about it. I'm gonna have Nikki Sixx, and we're gonna play 'Shout At The Devil'. I'm gonna have Nikki Sixx come up. Scott Ian's gonna play guitar with us, and Sebastian Bach is gonna sing. And it is gonna be a night to remember, that's for sure… You're the first person I told about this, so it's pretty neat."

John 5's official web site is also teasing "a special guest performance" at the Whisky show, with the guitarist insisting that "no recording devices" will be allowed during the pre-concert meet-and-greet and soundcheck. "We don't want to give the surprise away," John 5 is quoted as saying on the web site.

Bach confirmed his participation in the concert, sharing a link to this article on Facebook and writing in an accompanying caption: "See you April 6 at the Whisky w John 5, Nikki Sixx, and Scott Ian! Also get ready for NEW STUDIO RECORD featuring John 5 on 2 songs! So far! Our 3rd collaboration in a row. I can't wait to get the new album out!!"

If Sixx and Bach end up performing together in April, their onstage collaboration will come just under five years after they got involved in a war of words on social media when Bach stated via his Twitter account that he was asked in 1992 to replace Vince Neil in MÖTLEY CRUE. In response, Sixx shot down Bach's claim as "absolutely not true," adding: "I think maybe Sebastian wanted to be in MÖTLEY CRÜE and just forgot to tell us that he wanted to be in MÖTLEY CRÜE when we were looking for a singer." Sebastian then took to his Facebook page to describe in some detail the circumstances behind his being asked to join the CRÜE, which included taking part in a full day's rehearsal with the band and a slew of phone calls between various managers, agents and label executives. "I was driven to rehearsal by Tommy Lee, and I spent a full day singing the MÖTLEY CRÜE set with the band MÖTLEY CRÜE," Bach wrote. "I remember the songs that Nikki asked me to sing that day. I remember the whole road crew's ecstatic reaction to us jamming together all day. And I remember Nikki's very generous, kind offer, at the end of our rehearsal, for me to join the band MÖTLEY CRÜE. I remember his exact words that he said to me in front of his whole road crew, Tommy and Mick [Mars] as well. It's not every day that your hero asks you to join his band."

John 5 is touring in support of his concert album, "It's Alive!", which came out on January 25. The first live album released by John 5 and his solo band THE CREATURES — which includes Ian Ross on bass and Rodger Carter on drums — is also the first LP released by John 5 to be made available on vinyl. 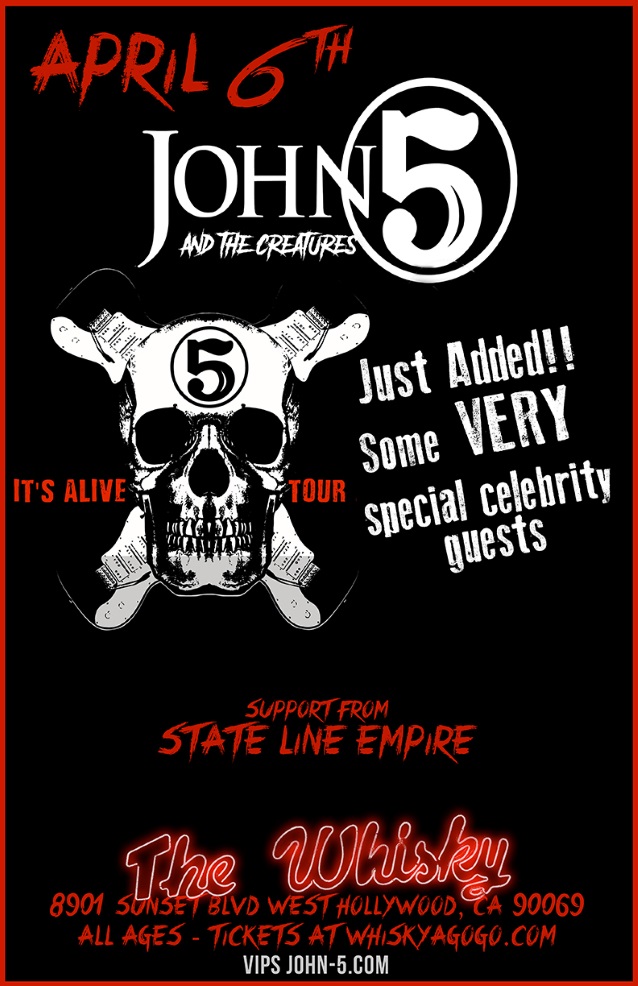