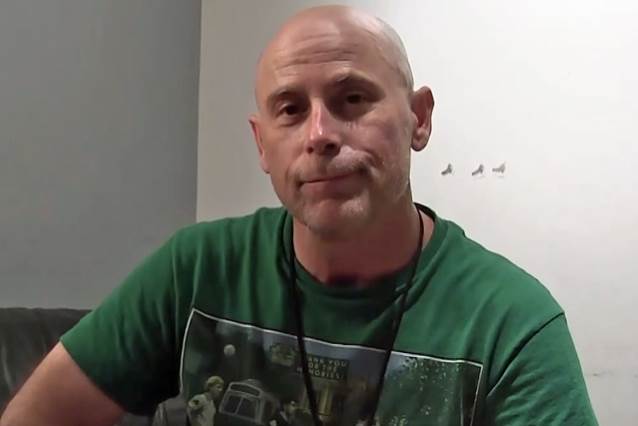 ARMORED SAINT vocalist John Bush has confirmed to The Metal Voice that the band has begun work on the material for the follow-up to 2015's "Win Hands Down" album. "We've written a few songs; I'd say about five we've demoed," he said.

"I think the new record will be amazing," he added. "'Win Hands Down' was awesome, and I think we set the bar pretty high."

Asked if the current political climate is something that he is drawing inspiration from for the lyrics to the new ARMORED SAINT songs, John said: "There's certainly a lot to write about. The way I usually write lyrics is I don't really kind of write about one particular topic; ironically enough, every song, there's probably three different meanings running through them. I kind of feel like if I'm writing about something that is of time, then it takes it away from being timeless. So I think you can use some metaphors, but I also wanna do things where there's sometimes puns and multiple meanings, so you can't say, 'Well, that's a great song, but it sounds like it was written in '88 and it's stuck there.' So that's kind of the way I approach lyrics. There's certainly a lot going on, and it's easy to write about."

As for a possible release date for the new ARMORED SAINT record, Bush said: "I would like to get something out, probably, in realistic terms, by the latter part of next year. That's realistic."

To further celebrate the legacy of this album, Metal Blade Records reissued "Symbol Of Salvation" on CD and LP in May. The LP features a vinyl remastering from Patrick W. Engel as part of the "Metal Blade Originals" series. The CD includes four bonus tracks.