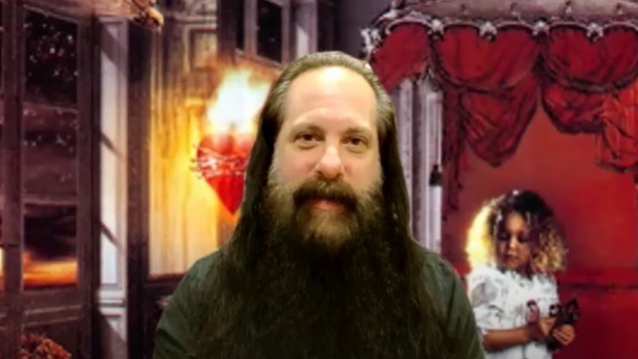 JOHN PETRUCCI: DREAM THEATER Fans 'Look Forward To Our New Music Just As Much As They're Nostalgic About The Old Music'

In a new interview with the "Breaking Absolutes With Peter Orullian" podcast, DREAM THEATER guitarist John Petrucci discussed the band's second studio album, "Images And Words", which celebrated its 30th anniversary this past Thursday, July 7. You can now watch the chat below.

Speaking about the fanatical nature of a lot of the DREAM THEATER followers, Petrucci said: "We're very, very fortunate, and one of the things I love about the people that listen to our music and fans of our music is that they anticipate the new music that we come out with and look forward to that just as much as they're nostalgic about the old music.

"[As a] fan of any band, you might have a certain song or record that you prefer more, or you love this or you like this certain period," he continued. "But, man, when we go and we play live and we're playing everything from a brand new song back to back with one of the first things we ever wrote and we get the same kind of reaction, that says so much. We love that. It's not like people are sitting there bored when we're playing a new song and then cheering when we're playing an old [track]. It's like the same amount of enthusiasm and love from the audience comes back to us whether we're playing 'The Count Of Tuscany' or 'A View From The Top Of The World' or 'Pull Me Under'. I love that — I really love that. I think it's rare for bands to have that that have had a long career. And so, again, we value that so much."

Back in 2017, when "Images And Words" celebrated its 25th anniversary, Petrucci was asked by Gitarre & Bass if he and his bandmates had a feeling during the recording process that the LP would turn out to be such an important album for them. "Well, we had no idea that it would end up doing what it did for us — basically launch our touring and international career as a band," he said. "That's really what it did. We had no idea, no. In fact, we didn't even write songs, really, that had that potential in that atmosphere, because all the things that were being played on the radio sounded nothing like DREAM THEATER, so we didn't really think we had a chance. They were playing NIRVANA and PEARL JAM. There was still some kind of '80-ish bands around and stuff. Even the band that David Prater, the producer, had done right before us was this band FIREHOUSE, and they were like a big pop-metal ballad band. So we didn't think we had any place. But we did feel really good about how the album came out. We felt very proud of it. We knew that it sounded good. I remember feeling really proud anytime I would play it for somebody. Like, 'Oh, you have to hear this. Check it out.' And the reaction was always, 'Wow! That sounds really good.' So we knew there was something there, but we had no idea what it would do for us."

Petrucci added that "Pull Me Under" is "probably" the most important song of DREAM THEATER's career. "If you think about what it did for us as far as the future is concerned, it really put up on the map," he said. "It enabled us to go from local guys driving around in a van, playing to a few people in clubs to an international touring band with this whole long and very busy and productive career. And who knows? Without that kind of initial spark, we may never have been able to be as successful as we have. I mean, who knows? Maybe we would have. I don't know. But it certainly, certainly helped. Big time."