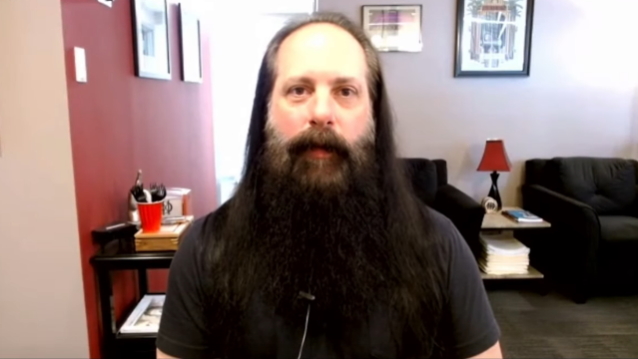 In a new interview with Japan's Young Guitar magazine, John Petrucci was asked how he feels about DREAM THEATER being called a "progressive metal" band. The guitarist responded (as transcribed by BLABBERMOUTH.NET): "Honestly, I think that's the perfect way to describe it, because, for me, I think about when I was younger and when DREAM THEATER first started, there was not the term 'progressive metal'; it wasn't used — people didn't say that. There was metal bands and there were prog bands.

"When we were younger, and me and John Myung [bass], we went to Berklee and we met Mike Portnoy [drums], we were 17 years old. When we started writing music together, we liked metal bands — we liked IRON MAIDEN and [JUDAS] PRIEST and METALLICA and OZZY [OSBOURNE] — but we also liked prog bands from the U.K.; we liked YES and GENESIS and PINK FLOYD and, of course, RUSH from Canada. So when we got together, we just naturally started writing progressive songs with a metal sound. So calling it 'prog metal', to me, seems the perfect description; it's exactly what it is.

"Fast forward [to] 1992 and [DREAM THEATER's] 'Images And Words' [album] came out and we started to gain popularity, and then that term, I think, started to develop. But before then, it really wasn't a thing. Our friends in FATES WARNING were in that style. There was a band from Texas called WATCHTOWER that was in that style. You can think about early QUEENSRŸCHE was a bit in that style, but it wasn't like it is now where it's a whole genre and there's all these different bands and offshoots. Really, the beginning was back then. And I feel proud that DREAM THEATER is part of that musical family tree, and I think prog metal is the perfect way to describe my band, for sure."

Three months ago, DREAM THEATER won its first-ever Grammy in the "Best Metal Performance" category in the pre-telecast ceremony at the 64th annual Grammy Awards, which was held at the MGM Grand Garden Arena in Las Vegas. DREAM THEATER was nominated for "The Alien", a track from its 2021 album "A View From The Top Of The World". DREAM THEATER's previous Grammy nominations were for the song "On The Backs Of Angels", from 2011's "A Dramatic Turn Of Events" album, and the single "The Enemy Inside" from 2013's "Dream Theater".