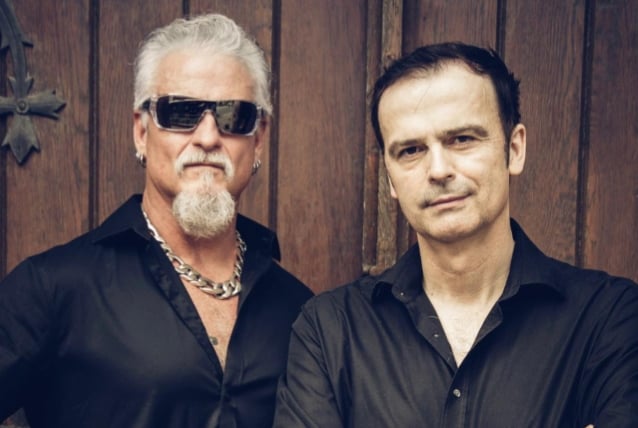 During a brand new interview with "Rock Talk With Mitch Lafon", ICED EARTH mainman Jon Schaffer and BLIND GUARDIAN singer Hansi Kürsch spoke about the musical direction of the third album from their DEMONS & WIZARDS side project.

"First of all, we just do whatever is natural — period," Jon said. "That's the only way to keep any of our bands successful through these years, as far as I'm concerned — just to keep it real. We are this sound. I mean, it's already there — that's established. We are the artists that we are.

"There's no question that when you hear this record, it's a DEMONS & WIZARDS record," he continued. "But it is completely different than the first two. I mean, it's just got so many more elements and we've grown so much as individuals, and that's a reflection that's in the music. There's some really dark and heavy stuff, and some really fast stuff, and some really super-melodic, classic-rock type of things and progressive stuff and even a little alternative. And all of it is just a completely natural flow — it's a completely natural development."

Added Hansi: "I'm just happy about what we're having at the moment. For me, it's always a little easier than for him, because I pick up on something. Either Jon or André [Olbrich, BLIND GUARDIAN guitarist] delivers me something, which is the source I'm building up on, apart from a few songs which I started — in BLIND GUARDIAN at least. But what I can say is that the music itself, it has a very natural flow and a very natural expression, and I just wanna keep that for DEMONS & WIZARDS, of course. It would be a waste not to do so. And, really, starting considering what we are 'supposed' to do, what would people expect… This album will be DEMONS & WIZARDS one hundred percently. Yes, I see our history in it as well. But in general, it's just new, fresh material."

DEMONS & WIZARDS recently released remastered versions of its first two albums on all digital platforms. Remastered by Chris "Zeuss" Harris (ICED EARTH, QUEENSRŸCHE, SANCTUARY),"Demons & Wizards" (2000) and "Touched By The Crimson King" (2005) were also released as expanded deluxe editions on June 7. The expanded editions feature liner notes by Kürsch and Schaffer as well as bonus material and were released as a limited-edition digipak, deluxe 2LP with etching and LP booklet as well as digital deluxe editions.

DEMONS & WIZARDS has just embarked on the "A Magical Encounter With Demons & Wizards" North American headline tour. The band hit the road starting August 17 in Los Angeles and will wrap up the trek with a sold-out show on September 7 in Atlanta.