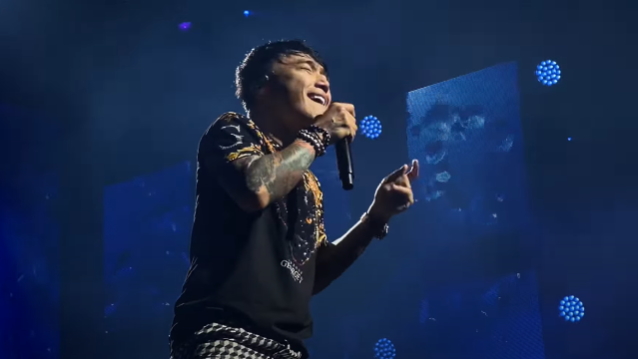 JOURNEY drummer Deen Castronovo, who rejoined the band i 2021 after a six-year break, has told Dave Spuria of The Real Music Observer that JOURNEY frontman Arnel Pineda is "singing better than ever" on the group's current U.S. tour. "We had to change our front-of-house guy," he explained (as transcribed by BLABBERMOUTH.NET). "Arnel was having a hard time hearing; he's been fighting this for years. And we finally figured out, after years and years, that the soundman, our front-of-house guy, has been just pushing the mixes that Arnel was turning up his in-ears — turn 'em up, turn 'em up — and his ears would close up. And he was having a hard time; he was struggling to hear himself. Now that we got this new soundman, who used to work with Shawn Mendes, so this guy really has stuff dialed in — a young guy. Arnel, man, it was just like a flip of the switch. All of us were just, like, 'Oh my gosh.' I mean, he hasn't lost it. And we were all concerned, like, 'Man, maybe he's just having a hard time. It's just a hard catalog. That's hard to do every night.' And we helped him out the best we could. But this changed everything, bro. It's night and day."

According to Deen, "99 percent" of Arnel's vocal issues in the past were caused by "what he was hearing and what he couldn't hear. And oh my gosh, man. Once we figured that out… This is our fifth show in with this new soundman… It's, like, oh my God. He's back," Castronovo said. "He sounds great. He sounds like he did in 2008. It's, like, wow! What an amazing event to have that happen and finally figure that out, after all these years, that that was the issue. And he said, he goes, 'Man, I've been fighting this for 10 or 12 years now… Unbelievable, man. It took one guy to just bring everything down and dial it in better. And he's soaring now — he's soaring again. It's unbelievable."

Deen went on to say that the soundman change has resulted in the members of JOURNEY having a lot more fun while performing. "You can see it in [Arnel's] demeanor on stage now," he said. "He's just smiling. That's why I never want that gig ever — I would never wanna be a frontman or a lead singer 'cause it's so much pressure. And to have that kind of pressure knowing, like, 'I don't know what's going on here.' And for him to barrel through that and plow through and finally get the relief, that weight lifted off, has gotta be… Oh my God. We're goofin' off on stage; he's laughing. It's, like, oh my God, my brother's back. Oh my gosh."