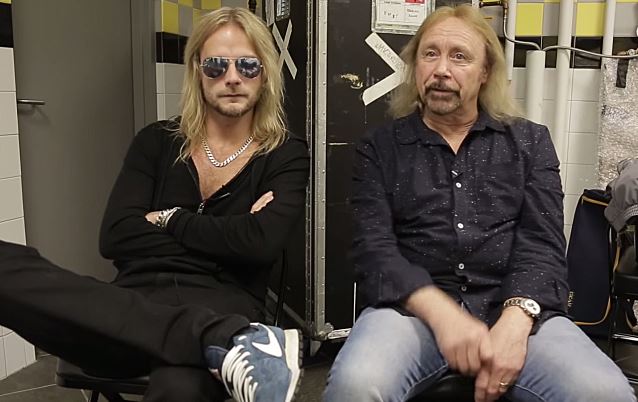 JUDAS PRIEST's IAN HILL: I Don't Think There's Any Reason Why There Shouldn't Be Another Album Next Year

U.K.'s Classic Rock magazine conducted an interview with JUDAS PRIEST guitarist Richie Faulkner and bassist Ian Hill at this year's Rock On The Range, which was held May 15-17 at MAPFRE Stadium (formerly Crew Stadium) in Columbus. You can now watch the chat below.

Speaking about when fans can expect to see the follow-up to PRIEST's latest album, last year's "Redeemer Of Souls", Hill said: "I don't think there's any reason why there shouldn't be a PRIEST album next year, you know?! It's pretty early days yet; we're still touring with 'Redeemer'. Towards the end of the year, we'll take stock of where we are and go from there."

Added Faulkner: "I think next year might be a bit optimistic. As Ian said, we're out for most of this year. But the last studio record we did, 'Redeemer Of Souls', was really creative. We'd just come up with idea after idea after idea. We actually had to cut off the writing process; otherwise, we'd run out of time… we wouldn't have time to record all the stuff. So, based on that, and the creative energy that was in the room, I'd be confident that there'd be another PRIEST record. Maybe not next year, though. But we'll definitely start having a look at things in the near future."

Asked by Premier Guitar if he was concerned how the new band dynamic with Faulkner would impact the writing process for "Redeemer Of Souls", JUDAS PRIEST guitarist Glenn Tipton said: "We hadn't worked with Richie before on a writing level, so the first couple of things he presented to us were quite crucial. It was amazing, because everything Richie came up with was just so PRIEST, and it evolved from that point on. For the first time ever, we actually wrote on the road. Richie would go down in the afternoon, set up his recording rig, and kick stuff out. When we had time off, we sat down and started piecing everything together. What we normally do is write our own ideas — including Rob's [Halford] lyrics and vocals — pool them, and before you know it, it takes shape into songs."