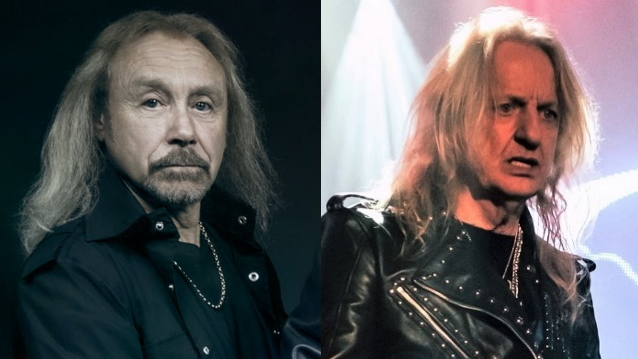 In a new interview with Alamo True Metal, JUDAS PRIEST bassist Ian Hill was asked what it was like to reunite with original PRIEST guitarist Kenneth "K.K." Downing and former PRIEST drummer Les Binks at the Rock And Roll Hall Of Fame induction ceremony earlier in the month. He responded (as transcribed by BLABBERMOUTH.NET): "The whole thing was magical. It was way different to what I thought it was gonna be. I didn't know it was gonna be such a large event, for start. It was loads of people — your paying public, if you know what I mean, not just the stars and the celebrities down at the tables in the front there. So that was a real big surprise — the actual scale of it all.

"It was a joy to do at the end of the day," he continued. "It was great to see Ken again. I hope he feels the same. [Laughs] It was very, very quick. We saw him for an hour or so on rehearsal day [two days before the induction] and then another hour or so on the show day. And then everybody went their separate ways. But it was nice to see Ken. Les, I hadn't seen Les — wow — since 1980, probably; 1979, 1980. But it was good to see him again and good to shake everybody's hand."

Speaking about the first time he saw K.K. and Les just prior to the Rock Hall rehearsals, Ian said: "I went over and said hello to Ken, said hello to Les. That's about as far as it went, really. So did Rob [Halford, PRIEST singer]. Glenn [Tipton, PRIEST guitarist], he was rather frail on the day, so he just sort of sat on the sidelines until he had to do his thing. And of course Richie [Faulkner, PRIEST guitarist] — Richie's gregarious; he was on the same side of the stage anyway, so he was talking to Ken a lot. But yeah, it was all very professional. It was all well done. At the end of the day, we put on a great performance, and we all got the gong, which was great news. [Laughs] "

Earlier in the month, Halford was asked in an interview with the San Antonio Current if performing with Downing at the Rock Hall ceremony helped put aside some of the acrimony that K.K. has shown about not being in band for these last few tours. Halford responded: "I think we should let the music speak for itself, really, because as you'll see from the performance, you'll see that all of that other stuff is irrelevant. All the things that have been said and suggested just float off into the air. What matters is what's going down on that stage at that time you're performing together. And there he is on my right-hand side. It just felt like he was always there. Look behind me and there's [Les], and the memories just are overwhelming. But, more than that, you're focusing on the moment that you're back together again and playing live. It was really a whirlwind. We were in each other's company for a very, very short space of time. We had very little time to communicate. But for the purpose of the induction of the Rock And Roll Hall Of Fame together, it was absolutely crucial that K.K. and Les were there. They were inducted, they needed to be in the room. And more than that, we were thrilled that they took the opportunity to say, 'Yeah, we'll come and jam on stage again with you guys.'"