JUDAS PRIEST's long-awaited new album contains "good energy" and "some real classic moments," according to a producer who worked on the disc.

Sneap, who plays guitar in the reactivated British occult metal act HELL, spoke about his involvement with the new PRIEST album during an interview with Serbia's Hardwired magazine.

Andy said (hear audio below): "When I first got involved with them, I think we had about twenty-six ideas that we were working on, which we've whittled down to fourteen or fifteen; we haven't decided on which songs [will make the final cut] or a running order for the album yet.

"I think it's got a really good energy and some real classic moments on there. Rob's [Halford] singing great, Richie's [Faulkner] on fire on it.

"We really, really pushed the band to play together in the studio, and we actually took tempos from them playing together rather than the demos.

"Glenn [Tipton, guitar] originally wanted to work on it like they have done on the last few albums and use the demos as templates and work off that, and I made them actually play as a band.

"I think we've got quite a fresh feel on it and quite an old-school approach at times. We pushed Rob on varying the patterns up a little bit on the verses."

Sneap recalled his first meeting with JUDAS PRIEST where he expected to sit down with Tipton and Faulkner to discuss their ideas for the new album's sound and overall direction. "I didn't even know Rob was gonna be there," he said. "And I went down to Glenn's house, and there was Glenn and Richie there. And the doorbell rang and it was Rob, and I was, like, 'Oh, fucking hell.' [Laughs] And I found myself, within thirty minutes, telling Rob how I wanted him to sing. And I [thought to myself] 'Shut up! I'm telling Rob Halford how I want him to sing' [Laughs]. But he was totally cool. I was saying how I wanted some of that 'British Steel' mid-range in there. And he was, like, 'Yeah, yeah. No problem. I don't wanna sing like a pub singer. You've gotta push me a bit. I can be lazy.'"

According to Sneap, "Rob did great" during the album's final recording sessions. "I'll tell you what: for someone who's got that much experience, there's no ego there at all," he said. "We'd do, like, six or seven passes, and I'd ask him to try something a bit [different] on this part, and he was, like, 'No problem.' And he'd give me another four takes with a slightly different vibe. And then me and Tom Allom would sit there and we'd comp it, and we pretty much agreed on everything.

"And the other thing… What Rob's really good at is harmonizing with himself," he continued. "And Tom's really good at… I didn't realize how much the classic PRIEST albums, a lot of the harmony ideas were Tom Allom's influence. So Tom was there, and because he's a keyboard player, he'd be singing harmonies to Rob, and Rob was nailing the harmonies like that.

"In fact, I got the multi-tracks from 'Screaming For Vengeance' from Tom Allom, and I think Rob is singing as well as he was back then, listening to it," Sneap added. "You're looking at something that was recorded in — what? — 1982, when 'Screaming' was done. So thirty-five years ago. And for a guy thirty-five years on in his career… I mean, they're playing in E flat now, so they are semitone down, but most bands are [these days]. He's nailing it. I took a vocal off 'Screaming For Vengeance' — I think it was a high F sharp — and I put it into one of the songs as a bit of a laugh. And Rob was, 'Oh, that's a good idea,' and he just went and nailed it again. So if he can hit the high notes from 'Screaming For Vengeance', that's quite impressive."

Sneap went on to credit Tipton for being the creative driving force behind JUDAS PRIEST.

"Working with Glenn, he'd come up with things and you'd be, like, 'Oh, no, no.' You'd think, 'Oh, no. Don't do that. Don't do that.' And then you do it, and it's, like, 'That's JUDAS PRIEST,'" Andy said. "It's weird. He's got a way of doing things that's quite unorthodox and quite not how… Me, as a guitar player, you've gotta try and steer the ship how you think it would go, but then Glenn would come in and sort of go, 'No, that needs simplifying,' and, 'I'm hearing something different here.' And he'll sing a guitar melody or a vocal melody. I didn't realize how much of the melodic aspects of PRIEST actually Glenn was a part of. But when you look at the credits on all the old albums, I think he's credited on nearly every song. But there's definitely a method to Glenn Tipton's madness in JUDAS PRIEST. Rob will come in, take an idea and just take it even further. It's good. It's a great dynamic. It's been really good fun working with them. They're super-nice guys."

JUDAS PRIEST's new album is tentatively due in early 2018. 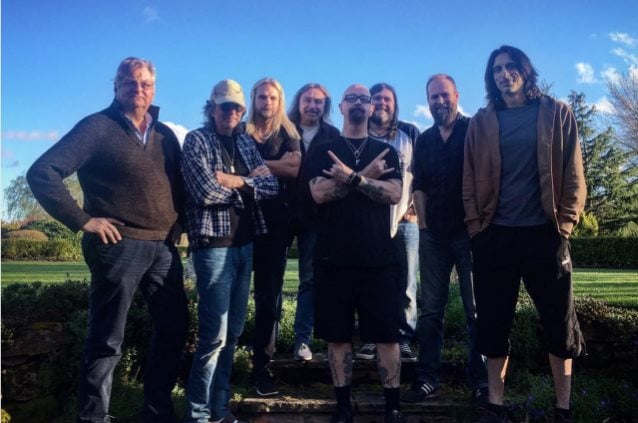 Great night last night with lords Tipton, Allom and Sneap. Myself and @andysneap were like a couple of fanboys listening...