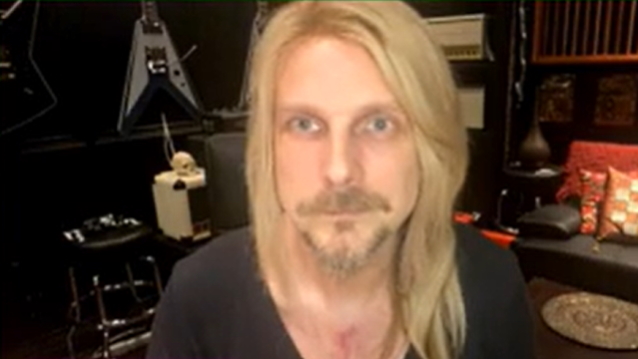 JUDAS PRIEST guitarist Richie Faulkner has opened up about his recent revelation that he underwent a second heart surgery in early August. The latest operation took place nearly a year after the 42-year-old British-born musician suffered an acute cardiac aortic dissection during a performance at the Louder Than Life festival, just a short distance from Rudd Heart and Lung Center at UofL Health - Jewish Hospital in Louisville, Kentucky. It took the hospital's cardiothoracic surgery team, led by Dr. Siddharth Pahwa and also including Drs. Brian Ganzel and Mark Slaughter, approximately 10 hours to complete Richie's first surgery, an aortic valve and ascending aorta replacement with hemiarch replacement.

Speaking to That Fuzzing Rock Show early last week, Richie said (as transcribed by BLABBERMOUTH.NET): "I've actually just come back from cardiac rehab this morning. I had to go in again for another open-heart surgery about five [or] six weeks ago. They found something just before the European leg [of JUDAS PRIEST's world tour]. And it was basically a hole in the repair and there was a leak — I'd basically sprung a leak in there — and it was causing a sack to form around my heart. So they found it just before the European leg. And the surgeon said it was okay for me to do Europe, [so] I was actually touring Europe, playing Europe with this sack and a leak inside there. What that meant was when I got back from Europe, two days later I was back in the hospital for another open-heart surgery. And I've been recovering since then. So, again, the surgeons and the doctors, they were all saying that it was enough recovery time to be able to recover before the next group of dates mid-October. And I'm doing well. As I said, I was in cardiac rehab this morning. I feel fit; I feel strong. But that's obviously why we had to… There was a festival in Sacramento [Aftershock] that we had to bow out of, 'cause I wouldn't have been able to do it. I needed that eight or nine weeks recovery time. That's why we had to pull that festival. So, yeah, I'm doing well — feeling strong, feeling healthy. But yeah, it was a bit daunting, to be honest, to be touring Europe knowing that that was going on. But you've gotta put your trust in the doctors, and it worked out okay; I'm recovering."

When the interviewer pointed out that it was the first anniversary of Richie's first open-heart surgery at the time of the chat, Faulkner said: "A friend of mine called me up a couple of days ago wishing me a happy birthday, 'cause he's, like, I've got a new… 'Cause they literally turned my brain off and they bypassed the heart, so it's almost like you die. So it's almost like they bring you back to life and you get a new… It's almost like your second life, so half jokingly he wished me a happy birthday 'cause it's almost like I was born again. So, yeah, it's like an anniversary, birthday — whatever you wanna call it. But it's been a tough year. But I've had a great support system, both at home and the surgeons and the doctors and everything. And also the band and everything. And also the fans — the fans have been super supportive, and I can't thank everyone enough."

Doctors said Faulkner would continue to be monitored and would receive a CT scan every six months for the first year.