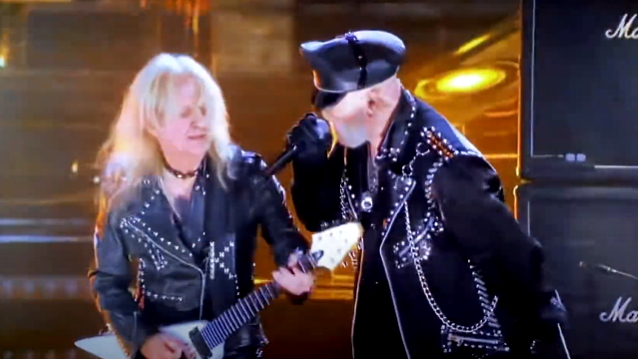 In a new interview with Sonic Perspectives contributor Robert Cavuoto, JUDAS PRIEST singer Rob Halford was asked what it was like reuniting with original PRIEST guitarist K.K. Downing for a performance at the Rock And Roll Hall Of Fame ceremony last November. He said (as transcribed by BLABBERMOUTH.NET): "It's wonderful. You hear stories about bands that have their differences and then coming together for special events like the Rock And Roll Hall Of Fame, and it's as though it was always there; it's as though the time element of who we're about and what we do in music ceases to exist. Much like when I returned to PRIEST after my 10- or 12-year hiatus, you just carry on. You carry on because the music carries you in the essence of carrying on. It's all about the music. And so when we fired up those classic songs together, it just felt great; it felt complete in the sense of what we were trying to achieve that particular night. And it roared."

Halford went on to say that he has "yet to see" a video of PRIEST's Rock Hall induction. "People go, 'Have you watched the performance yet?' It reminds me of Maggie Smith from that great British TV show ['Downton Abbey']. They asked Maggie Smith, 'Do you watch your performances?' [She said], 'No. I was there. I did it. So why should I wanna see it again?' So, there's a little bit of that," he said.

"I'll tell you — it was over so quickly. That's the thing I remember, if anything, was that it was so fast. It took such a long time to get to that moment, and the eight minutes and change that we had to do the job that we had to do was over in a flash. And then we were all sitting in the dressing rooms afterwards having a bite to eat, going, 'Did it happen? Were we there?' And then my highlight [singing] with [fellow Rock Hall inductee] Dolly Parton and meeting all of these other wonderful people. I never knew Pink was a fan, and all of this great talent that are out of the world of metal, but, again, [it's] proof that music has no barriers; it has no walls. We love each other in our music endeavors for various reasons.

Halford, Hill, Tipton and Travis were joined by Binks, Downing and current PRIEST guitarist Richie Faulkner for a three-song medley consisting of "You've Got Another Thing Comin'", "Breaking The Law" and "Living After Midnight".

In a December 2022 interview with Metal Talk, Downing reflected on his reunion with his former bandmates at the Rock Hall induction. The 71-year-old guitarist, who sat at the same table at the induction ceremony as the other PRIEST musicians at the event, said that he had a chat with Travis and was able to "break bread" with Halford and Hill. He also exchanged some pleasantries with Tipton, with whom he had shared a stage for decades, and Faulkner, who replaced him in 2011.

Regarding what it was like to speak and play with Faulkner, Downing said: "Yes, I managed to have a chat with him, and we shared the stage and even jammed together. It could have been awkward, but it wasn't. I've nothing but respect for him, and I know he's working on other projects outside PRIEST, and I wish him well." He laughingly added: "The only potentially awkward moments were because I like a lot of room and have always raced around the stage, and we had to avoid each other."

Last month, JUDAS PRIEST's longtime manager Jayne Andrewstold the "Gabbing With Girlfriends" podcast that PRIEST's reunion with Downing "was a bit strange" because K.K. "just kept himself to himself. Even when he got on stage with the band [to perform at the Rock Hall], he didn't really communicate much with anybody," she said.

Andrews went on to say that Downing missed an opportunity "to try and build bridges" with his former bandmates, adding that K.K. "could have stuck his head around the door" in the dressing room "and said, 'Thank you for inviting me on stage with you.'" She also said that he K.K. "seemed a little bit nervous and almost out of his depth" during the Rock Hall performance.

In November, Halford was asked in an interview with the San Antonio Current if performing with Downing at the Rock Hall ceremony helped put aside some of the acrimony that K.K. has shown about not being in band for these last few tours. Halford responded: "I think we should let the music speak for itself, really, because as you'll see from the performance, you'll see that all of that other stuff is irrelevant. All the things that have been said and suggested just float off into the air. What matters is what's going down on that stage at that time you're performing together. And there he is on my right-hand side. It just felt like he was always there. Look behind me and there's [Les], and the memories just are overwhelming. But, more than that, you're focusing on the moment that you're back together again and playing live. It was really a whirlwind. We were in each other's company for a very, very short space of time. We had very little time to communicate. But for the purpose of the induction of the Rock And Roll Hall Of Fame together, it was absolutely crucial that K.K. and Les were there. They were inducted, they needed to be in the room. And more than that, we were thrilled that they took the opportunity to say, 'Yeah, we'll come and jam on stage again with you guys.'"