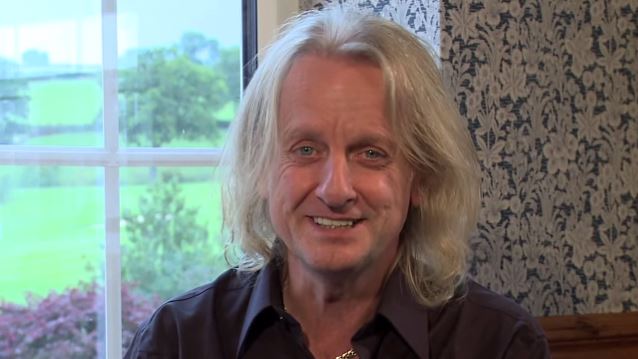 K.K. DOWNING Doesn't Regret Leaving JUDAS PRIEST: 'I Thought That It Had Run Its Course'

Former JUDAS PRIEST guitarist Kenneth "K.K." Downing says that he has no regrets about leaving the band but admits that he misses "being at the pinnacle" of the group's career.

Downing, who is a founding member of the British heavy metal legends and was part of the group since 1969, announced his retirement from PRIEST in April 2011. He has since been replaced by Richie Faulkner, most recently guitarist in the backing band for Lauren Harris (daughter of IRON MAIDEN bassist Steve Harris).

Speaking about his decision to leave PRIEST, Downing told DigitalJournal.com: "I felt that a lot of the spark wasn't there — for whatever reason — anymore on stage. I felt that I had it, but I felt it wasn't what I originally signed up for...

"All that travelling and living out of a suitcase and spending so much time in planes, vans, cars and trains, you have to really enjoy the concerts. You have to musically get on a high and that carries you through, but if you're not enjoying it like you should, then it becomes a lot of hard work because you've still got to do the interviews and be pushed and pulled around the place."

Asked if he has ever regretted his decision to leave, Downing said: "I don't regret leaving, because, to me, I thought that it had run its course. I miss what we had, but I don't particularly miss what we had become when I left… You can look at YouTube and see JUDAS PRIEST playing at the US Festival, or at Live Aid, and I miss being at the pinnacle of the band. I miss that energy and youthfulness and just delivering all of that up.

"You become a certain age and I think that I would have been happy if, as I said, I was enjoying the shows. There's disagreements with how things should be done and I thought if I'm outnumbered, then it's time to go...

"But I suppose we did fantastically well. I mean 40 years is great and I commend the guys for going back out. I was just watching a bit of their first concert of the tour in Rochester, New York, and it was great. Band sounded good and I'm happy that they continue.

"I sent an email saying 'good luck with the new tour, guys' to the management office. I do wish them well and I commend them highly for being out there and carrying on the legacy."

Downing also revealed that he is about to release a new line of fragrances called Metal For Men and Metal Pour Femme through a partnership with the UK digital radio station Planet Rock. "That's something else I've thought of in my sleep," he explained. "Don't ask me why! You see these people do a fragrance from the pop world and stuff like that, but nobody's actually catering for rock and metal fans, so I thought I'd solve the headache of what to buy for Christmas type of thing..."

JUDAS PRIEST singer Rob Halford and guitarist Glenn Tipton recently said that there were no plans for Downing to rejoin the band on the road anytime soon, despite Internet chatter to the contrary. Asked by New York radio personality and VH1 Classic "That Metal Show" co-host Eddie Trunk if there was any truth to the rumor that Downing was at one point going to contribute to the songwriting process for the band's new album, "Redeemer Of Souls", and possibly play some shows with the group alongside his replacement, Faulkner, Tipton said: "There's no plans for that. Ken didn't get involved in the writing of the album and there are no plans for him to join us on tour."

He continued: "I mean, Ken was quite honest when he left. He made it clear to us that he wanted limited conection with us because he didn't wanna try and get us to talk him into going back into the band. And we honored his request, really."

Downing in 2011 shot down as "inaccurate" reports that he left JUDAS PRIEST because he chose to concentrate on running the 18- and nine-hole golf courses on his property.