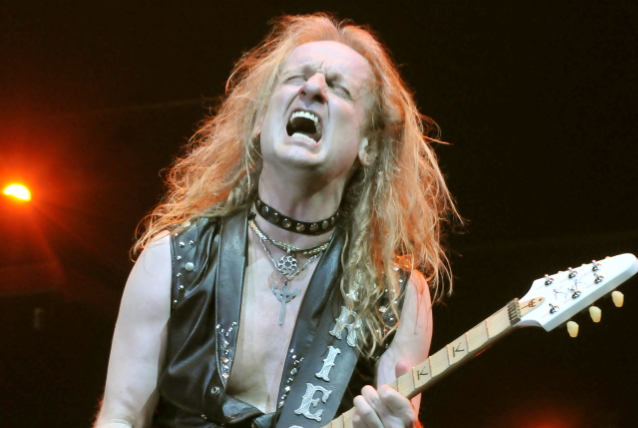 Ellefson performed a full-length set of PRIEST classics with Downing, Owens and ex-JUDAS PRIEST drummer Les Binks in November 2019 in Wolverhampton, United Kingdom. However, when KK'S PRIEST's formation was first announced over a year ago, the band's bassist was listed as Tony Newton, a founding member of the long-running British hard rock act VOODOO SIX. At the time, it was assumed that Ellefson's non-involvement with KK'S PRIEST was down to the fact that his main priority was MEGADETH, which was working on a new studio album.

In late May, MEGADETH announced that Ellefson was no longer a member of the band, prompting speculation from some fans that he would join KK'S PRIEST in time to play shows in support of the group's upcoming debut LP.

Downing addressed the prospect of Ellefson playing with KK'S PRIEST in an interview with Metal Pilgrim. Asked if David was ever in the mix for the bassist position in his new band, K.K. said: "Dave's a great bass player, and he's a lovely guy. He's a total gentleman. He's so well loved all over the planet. But, no, that was never a consideration, because I didn't want that kind of split kind of hybrid situation — like MEGA-PRIEST or PRIEST-DETH; it was just a combination of two bands.

"Dave was still in MEGADETH at the time and doing exceptionally well," Downing explained. "They were about to go out with FIVE FINGER DEATH PUNCH, and then they were supposed to do their own headlining show, with LAMB OF GOD supporting. And all of that was happening. So Dave wasn't available. And the last thing I wanted to do was ever — even if it was on the cards — to form a split of MEGADETH. So that was never a consideration."

Last month, Downing said during an appearance on SiriusXM's "Trunk Nation With Eddie Trunk" that he was still "in touch" with Ellefson. "I did send David a text saying, obviously, 'You've got a lot of friends around the world,'" K.K. said. "And he does. He's not just liked — he's actually loved. Because he's such a gentleman. He gives time to… I prided myself in PRIEST, I really felt I was the one guy that was the very last person to hang out with the fans and just socialize and all of that. But David is exactly that person — he really is — and everybody says that about him.

"What happened [with David] — and I talk about it with other journalists and things like that — if this had happened in the '70s or the '80s, it would have just been put down to rock and roll," K.K. said. "He's no different to anybody else. We've all got strengths, and we've all got weaknesses, especially as men, I'm afraid. And so many have kept the doors closed where David messed up and left the door ajar, but he's no different to anybody else. So, I wish him well and everything, and I know that he will, obviously, come back, because he's so good. And he's an amazing bass player; there's no two ways about it. 'Cause when we did the gig at [the Wolverhampton club] Steel Mill, he flew in. We had one rehearsal, in the freezing-cold rehearsal room. He just got off the plane — and Ripper as well — and we ran through the set once. Then we went out and did the show, for better or for worse."

KK'S PRIEST's debut album, "Sermons Of The Sinner", will be released on August 20 via Explorer1 Music Group/EX1 Records. The LP's first single, "Hellfire Thunderbolt", was released in May. The title track followed last month.