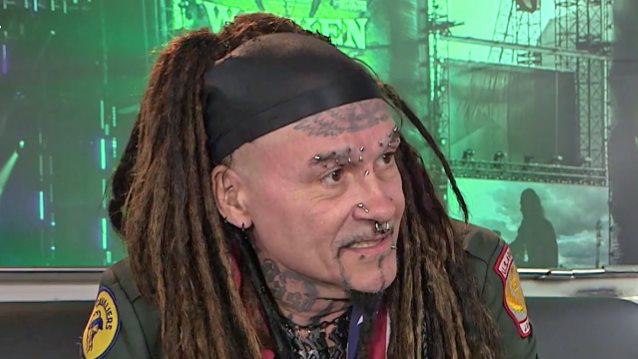 MINISTRY's AL JOURGENSEN: 'TRUMP Is Not Frightening; TRUMP Is An Idiot'

ARTE Concert conducted an interview with MINISTRY mainman Al Jourgensen at this year's Wacken Open Air festival, which is being held August 4-6 in Wacken, Germany. You can now watch the chat below.

Speaking about controversial Republican presidential candidate Donald Trump, Jourgensen said: "Trump is not frightening; Trump is an idiot. What's scary is that three to four people out of ten people in America think that this would be a good idea to have him run our country and quite possibly the NATO alliance. This is not good. But I see the same pattern in Germany and France and Italy. The right wing makes this comeback because they play on people's fears and we saw this in the 1930s here, and this is history repeating, because people don't learn lessons, and Trump is a lesson that needs to be learned."

Jourgensen recently announced plans to record a new MINISTRY studio album to follow 2013's "From Beer To Eternity", despite previously saying there would be no further MINISTRY records after the death of longtime guitarist Mike Scaccia in 2012.