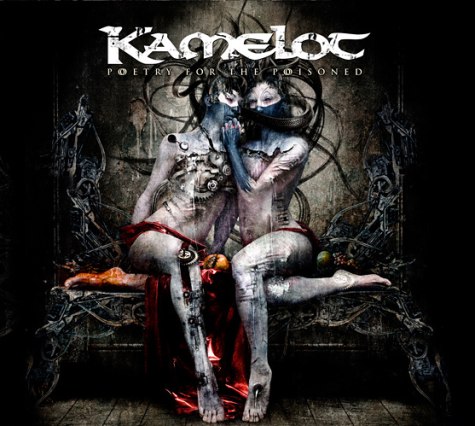 A three-and-a-half-minute medley of tracks that will appear on "Poetry For The Poisoned", the highly anticipated ninth studio album from American/Norwegian metallers KAMELOT, can be streamed on the band's MySpace page. The CD will be released in North America on September 14 via the group's own label, Kamelot Media Group (KMG Recordings),and in Europe on September 10 through earMUSIC/Edel. Marquee/Avalon Records will make the CD available in Japan.

KAMELOT's reputation among fans and media alike is marked by enthusiasm as well as esteem, with each of its eight studio albums to date surpassing its predecessor in terms of songwriting, production and commercial results. As one of the most difficult-to-categorize artists on the metal scene, KAMELOT is ready to release its most insightful and ambitious album to date, "Poetry for the Poisoned".

Throughout the recent years, KAMELOT's releases have achieved cult status around the world, and "Poetry for the Poisoned" will "once again raise the bar for others to follow," according to a press release. "The new studio album blends their trademark KAMELOT sound with new elements and a creation of musical art that will set a new standard in the genre."

"Poetry for the Poisoned" was mostly written in the remote woods of Norway to the final songwriting sessions in a remote region of Germany. The compositions take the listener through many emotions and dynamics that touch the soul and the mind.

"I think this album is by far our most diverse, fusing new ideas and elements along with the traditional KAMELOT sound and style that we have established over the years," states KAMELOT guitarist Thomas Youngblood.

Recordings took place in the familiar Gate Studios in Wolfsburg, Germany with producers Sascha Paeth and Miro. Additional tracking also took place in Tampa, Florida as well as various studios in Sweden, Greece and the U.S.

"'Poetry For The Poisoned' is a mix of progressive elements, modern rock, dark arts and also power metal," states Youngblood. "It comes at a time where many people around the world are searching for something to grab on to spiritually, including myself. I recently lost my mother and to be honest it was very hard on me. So there are some melancholy moods reflected on this album."

Frontman Roy Khan assures that "Poetry for the Poisoned" will both please the band's existing following and expose the universe of KAMELOT to a whole range of new fans. "'Poetry for the Poisoned' is our longest and toughest production so far, but when I hear the result I know it was well worth the struggle," he says.

"Poetry For The Poisoned" will be available in three versions:

"Poetry For The Poisoned" track listing:

KAMELOT recently tapped Swedish director Owe Lingvall of Village Road Films for the video shoot and production of the song "The Great Pandemonium".

Simone Simons — the longtime girlfriend of KAMELOT keyboardist Oliver Palotai — previously appeared on the song "The Haunting", which was included on KAMELOT's 2005 album "The Black Halo".

KAMELOT will embark on its first North American tour in two years in September. Support on the trek will come from LEAVES' EYES and BLACKGUARD.