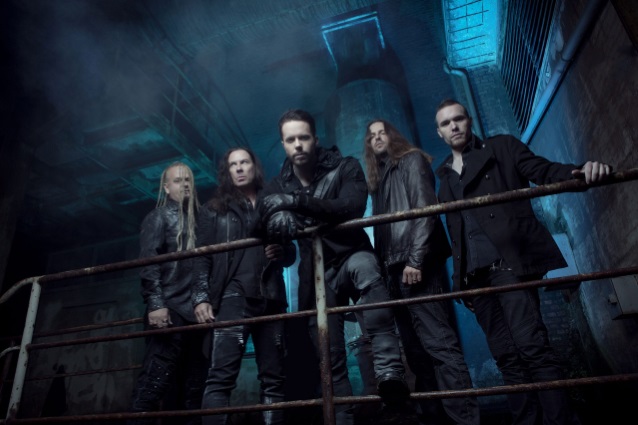 KAMELOT Tries To Make Its Albums Feel Like 'An Adventure,' Says TOMMY KAREVIK

KAMELOT vocalist Tommy Karevik was recently interviewed by The Psychosin Project. The full conversation can be streamed below. A few excerpts follow (as transcribed by BLABBERMOUTH.NET):

On the reaction to the group's new album, "The Shadow Theory":

Tommy: "It's been really great. It's been overwhelming, actually. You never know what the reception's going to be if you release something, and you're always a little bit nervous of how it's going to go over, but it's been great, and people are happy."

On whether the album should be viewed as a continuation of the group's previous release, 2015's "Haven":

Tommy: "Yeah, definitely. There are some similarities. We felt we weren't done with that kind of sci-fi, dystopian, futuristic platform. We felt we wanted to explore that a little bit more on this one. We all love sci-fi, and the future is so exciting — you don't know what's going to happen — so for us, it was a no-brainer. When Thomas [Youngblood, guitars] decided to base it around Carl Jung's shadow aspect, the psychological aspect that everyone has a shadow, and unless you embody it, the darker and bigger it gets. That was a very interesting starting point psychologically for the whole theme. Then we decided to not make a story like '[The] Black Halo' or 'Silverthorn' was, where you can follow characters, but more loosely based theme — how we portray the world, basically."

On whether the group plans to make more albums in the future with storylines:

Tommy: "I'm sure we will. We all love that stuff. I've been doing it with KAMELOT, and also with SEVENTH WONDER a couple of times. It's always a very interesting process of writing, and also for people to enjoy it as a whole. But I think people can do that with this album too. That's one of our mani goals always, to make sure that it's a ride throughout the whole album. They can put it on and listen all the way through and have the right pacing, the right mood changes so that you really feel like you have an adventure."

On whether "power metal" is a good description for KAMELOT:

Tommy: "I think it's really hard. I never know what to say when someone asks me to describe the style. To me, power metal is not what it's all about. I don't know if it's always been [that way] — the earlier records for sure, but the later records have had equal amounts of power metal and straightforward rock, basically, or metal in a compact form, mid-tempo stuff. It's more just music. For me, KAMELOT is musical music in a metal form. It's just music to me."

On which other vocalists he'd like to have guest on future KAMELOT albums:

Tommy: "Of course, all my heroes, mostly heroes that are no longer with us. Michael Jackson would be my preferred choice."

Tommy: "This tour has been a nightmare. It was already hard last time, but this time is crazy — like, 'How can we take away this song? But we have to, because this song has to be [included].' It's a nightmare. I don't even want to think about it. It's a good thing too, because that means you have a lot of songs that people probably want to hear and that we want to play."

Tommy: "Success is a hard thing to define. Of course, we want to keep on growing, and we want to bring the show to new places in the world where we haven't played. That's always some kind of a measure to how much success you have, if you bring a good production to a place you haven't been. We look forward to that, and really make sure that everyone that sees a KAMELOT show has the same experience in terms of production. If we can do that, we can consider ourselves successful, I think."

"The Shadow Theory" was released April 6 via Napalm Records. The follow-up to "Haven" was helmed by longtime producer Sascha Paeth and mastered by Jacob Hansen.

KAMELOT is currently in the midst of a North American tour, to be followed by European shows in the summer. The band will then return to Europe in September/October for its biggest headlining tour to date.