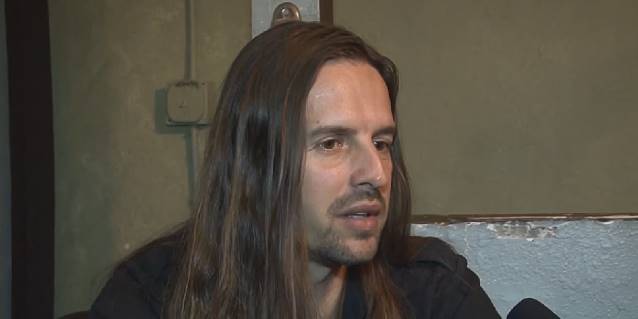 Kamelot Germany recently conducted an interview with keyboardist Oliver Palotai of American / German / Swedish symphonic metallers KAMELOT. A couple of excerpts from the chat follow below.

Kamelot Germany: How was it for you to sit out KAMELOT's North America tour? This has been the first time since you joined the band.

Oliver: I actually thought it would be harder, but my trick was to avoid trying to get the latest news all the time. I could've easily sat in front of YouTube every evening, trying to watch all the newly uploaded videos. I didn't do that. I also kept my normal working schedule, and only got feedback from the guys from time to time, telling me it's going great. This balance helped a lot to not miss it too much. Then Simone Simons [EPICA singer and Oliver's longtime girlfriend] and I were preparing and looking forward to the birth of our son, which eventually happened right after the end of the tour. He had a bit of… bad timing. I'm not sure if he's going to become a musician. [Laughs]

Kamelot Germany: You became a dad last autumn. How is your little family doing?

Oliver: It's going great. How shall I express it without scaring people away from having babies… it's brutally exhausting. You can't imagine how exhausting it is. How close it pushes you to your limits, especially with the first three months. All the rules that exist are correct. Now he's going for the fifth month. He's almost four months old and it gets better from week to week. You are able to pick up old habits again, like reading a chapter of a book. That wasn't possible in the last couple of months. But it's so worth it in every regard. It's so amazing to wake up at his side every morning and to experience how he laughs at me. This has a dimension I would not want to miss. Despite all stresses and strains. Admittedly, my productivity is only at 50% at most. Sometimes it's impossible to do anything, especially since I need at least 2-3 hours to work. When I'm writing a song, for example. I'm not the kind of guy who can just sit down for 45 minutes and start orchestrating. Usually I don't start at all in such cases. Today, for example, I finally had a day, where I was able to really work like it used to be. [Laughs] But it's improving week by week.

Kamelot Germany: Did you already start thinking about the next KAMELOT album? Is it going to be proggier, now that you and Tommy [Karevik, vocals] are part of the songwriting team?

Oliver: I have the first idea for a song written down. I start collecting ideas weeks before I begin working on a project. When I watch a movie, for example, and the end credits scroll down, most others would already go back to the menu. I keep watching, hear a phrase and think, "That would be cool for KAMELOT." Something like this, or the set-up of instruments. Therefore I've already been collecting ideas for weeks and making mental notes. How complex the whole thing will be is impossible to say. Such things usually evolve during the songwriting process.But I have to be careful in general. I always have to check what I'm doing, because I usually tend to go into a too complex direction. Things that I see myself as absolutely simple and catchy, are perceived completely differently by others. The typical response goes like this: "I think I have to listen to this a couple more times."

Kamelot Germany: Since Tommy became the new singer of KAMELOT, the band (at least in my opinion) have really blossomed. How were the last 1 ½ years with KAMELOT?

Oliver: It felt like this for me too. You can't deny that a lot of internal knots got unravelled. With the new singer it was a new beginning for us. That was a super positive feeling and it actually still is. Tommy is, through his occupational background alone, a very disciplined and reliable guy. He doesn't conform at all to the usual conventions, which I personally recognize from 90% of all singers, and I have played in quite a few bands so far. That is also something that the band itself benefits from. This positive energy gave everyone a boost.

Kamelot Germany: What drives you to make music?

Oliver: Hmmmm…. Because I didn't learn anything better? For me the most important in life is to learn and to continue learning. I would go crazy otherwise. I can't even sit still for 20 minutes in the subway, without a book or a magazine in my hands. I was just lucky to discover my musical talent. Nature bestowed me an above-average ability in this regard, but I don't want to imply that I have total outstanding talent, of course. Other people can do this with carpenting, or with penmanship, or constructing cars. I just think it's important that you grow in your field and reach some spiritual understanding. For me, it's music. Nature cast the dice and I was lucky enough to grow up with music lessons. While doing that, I realized, "Okay, I'm good at this and it comes more naturally to me than other things."

Kamelot Germany: Do you and Simone have any plans to for a musical project together in the future?

Oliver: We've been planning to do that for ages. We even have a name for it, something that usually comes last and causes the most headache. We also already have a vision about what we want to do. That's another one of these projects that are on my to-do list. It's all a question of time, but this is something that really has to happen one day. I just don't know when.