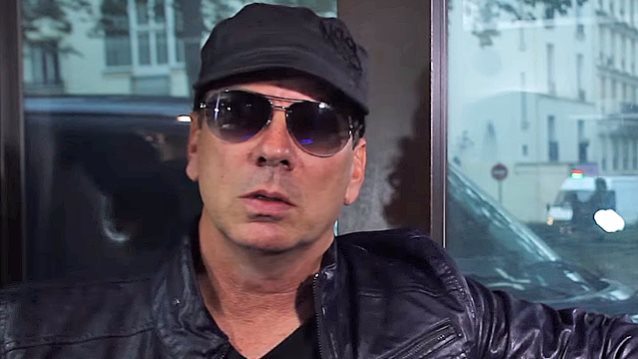 KAMELOT's THOMAS YOUNGBLOOD: 'Get Out And Live Your Life. Don't Live It Through The Phone'

Sons Of Metal TV conducted an interview with KAMELOT guitarist Thomas Youngblood in Paris, France in September 2015. You can now watch the chat below. A few excerpts follow (transcribed by BLABBERMOUTH.NET).

On KAMELOT's musical and lyrical approach:

Thomas: "We always try to paint some sort of cinematic picture with our music, and also lyrics. We want that to convey some sort of story or some kind of ideas that we have about the way we think about certain things in life, whether it be religion or politics. We like to use a lot of metaphors in that aspect."

On the message of KAMELOT's "Liar Liar" video, which depicts a dystopian world with a religious figure trying to control everything:

Thomas: "I think that should be something everyone's concerned with, whether you're a religious person or not. You can see the role that religion plays in life today. Here it is, 2015, and still it's a massive influence on people, whether it be in the Middle East or even in the United States with the way that things are being done, wheter it be in the government… I mean, we try to always separate government from religion, but it's very difficult when you have people that are actually in the government that are very religious. And it's an important thing that we have in the U.S., the separation of church and state, which, at some point, is really gonna be crucial. If another religion, for example, grows in the U.S. and the other religions don't like it, you know what I mean? So it's important to keep that separate."

On the lyrical themes covered on KAMELOT's new album, "Haven":

Thomas: "Well, like we were talking about [earlier], we really try to paint this more, future-modern kind of dystopic world. And we can kind of see the human evolution going towards this, whether it be with the way we treat the environment and also technology taking over. There's a picture of people walking with their cell phones; there's a whole bunch of 'em, and it's like the zombie apocalypse is actually happening. So that whole kind of thing is prevalent in society and you can see that evolving into something that, I think, could be destructive if we don't get back to the simple things in life: you know, nature and actually reading a real book, writing real letters… that kind of thing."

On whether it bothers him to see so many people in the crowd at KAMELOT shows spending all their time filming and taking pictures of the concert instead of enjoying the moment:

Thomas: "Yeah, it does, actually. But, you know, it's a little bit 'douchey' to say, 'Hey, please, put your phones down.' So if people wanna do that, I'd rather that the peer pressure from other people in the crowd dictate what happens there. For me, it's just irritating that you're living your life through this screen instead of just experiencing the concert. And that goes for everything. Just like people walking around, or [they're] in public, and they're just constantly looking at their phones. It's, like, get out and live your life. Don't live it through the phone."

The CD was made available on May 5, 2015 in North America and May 8, 2015 in the rest of the world (excluding Asia) via Napalm Records as part of an exclusive licensing deal through the band's Kamelot Music LLC.