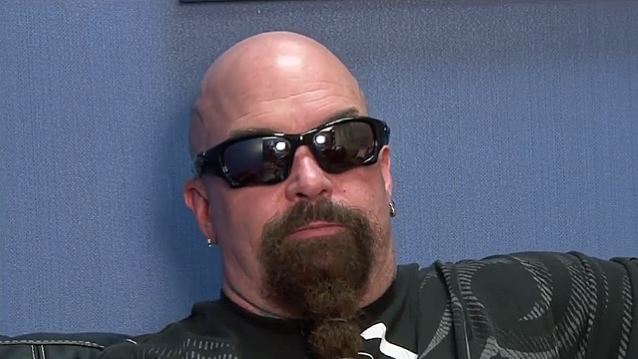 KERRY KING: One Of JEFF HANNEMAN's Last Decisions In SLAYER Was To Get PAUL BOSTAPH Back

Lombardo was effectively fired from SLAYER after sitting out the band's Australian tour in February/March 2013 due to a contract dispute with the other members of the group. He has since been replaced by Bostaph, who was previously SLAYER's drummer from 1992 until 2001 and recorded four albums with the band.

Asked what the reason was for SLAYER's latest split with Lombardo, King told Artisan News (see video below): "Misinformation — not coming from SLAYER."

Regarding how Bostaph's return to SLAYER came about, King said: "It was really weird for me, because when we… when Dave made his big, you know, tirade in the press, we were on a flight [to Australia] for fourteen hours and couldn't make any rebuttals. So by the time we landed, it was almost like old news. So we didn't respond. But the funny thing is the first text on my phone — which I got a billion texts; I'm, like, 'What happened in America?' — was Paul. And he goes — I'm sure it's still in my phone somewhere — he said he wanted his job back. And my first impression was, why would I take somebody back that quit my band twice? And I even asked him, after we rehearsed. 'Cause we rehearsed…"

He continued: "When we went to Australia, [former SLAYER drummer] Jon Dette bailed us out, which I was super-thankful for, so I tried out Jon Dette and I tried out Paul on the same brand new two new songs. I gave 'em each the exact same amount of time to learn 'em: 'Here's the parameters. Let's see what happens.' Then that was one of Jeff's last decisions in SLAYER; he voted Paul back in. And I wouldn't go against Jeff. Jesus… For him to be paying attention and being able to make a decision, I was, like, fuckin' sending skyrockets in the sky: 'Thank you! Jeff did something!' So I wanted him to be a part, and he couldn't. So, you know, I know from talking to Jeff that he wanted Paul. I think Tom [Araya, SLAYER bassist/vocalist] wanted Paul, and I was already outnumbered, so it didn't matter if I wanted Paul or wanted Jon; it didn't matter."

King added: "Before we gave him the gig, I called up Paul… 'Cause we were friends the whole time; there was never bad blood. I mean, I don't think I ever asked him why he quit. But, you know, he was always my friend. We'd come through town, and I'd say, 'Hey, man, you coming to the show? Let's go have some drinks.' Whatever. And I called him. I said, 'Paul, what's there to say, if you get this gig, that you're not just gonna fucking leave in eight months?' And he's, like, 'Oh, man…' I don't remember exactly what he said, but he was just, like, 'Oh, man. I'm more grown up now. I'm 50 years old. I don't wanna go in other bands.' And I'm, like, 'Dude, I certainly don't wanna get new bandmembers.' If this is how it is 'till the day we're done, I will be a happy motherfucker, because it's just a pain in the ass changing members. It makes people… It makes the fan base question what you're doing."

Gary Holt of San Francisco Bay Area thrash icons EXODUS has been the touring guitarist for SLAYER since January 2011 when Hanneman contracted necrotizing fasciitis, also known as flesh-eating disease, from a spider bite in his backyard.