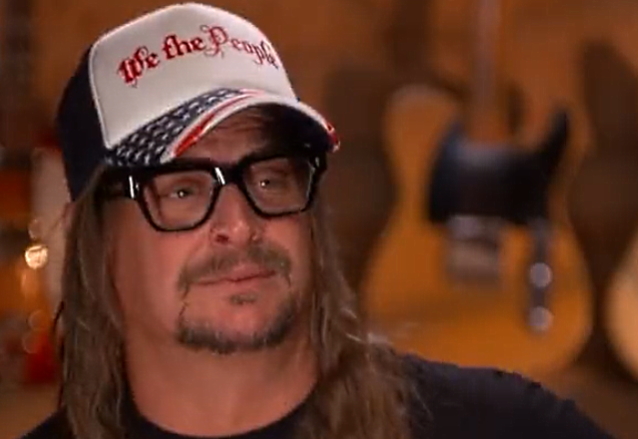 KID ROCK: 'I Am Uncancelable'

Outspoken conservative rocker Kid Rock recently sat down with Fox News host Tucker Carlson for a rare one-on-one interview. According to a message on Tucker's official Twitter, "nothing" was off the table in this "fascinating discussion", part of which will air Monday, March 21 on "Tucker Carlson Tonight" at 8 p.m. ET on Fox News.

In a short preview clip shared by Carlson, the Fox News host asks Kid Rock, "Why haven't you been canceled? Like, people aren't allowed to say what they think. You are."

Rock responds that he is "uncancelable," and when Carlson asks "why's that?" Rock responds, "'cause I don't give a [expletive].

"I'm not in bed with any big corporate things. At the end of the day, there's nobody I'm beholden to: no record companies, no corporate interests, no nothing. You can't cancel me," Rock says. "I love it when they try."

Kid Rock is currently promoting his new album, "Bad Reputation", which will be made available digitally on March 21. Physical CDs will arrive on April 6.

"We the people in all we do reserve the right to scream, 'Fuck you!" Kid shouts in the song. "Wear your mask. Take your pills. Now a whole generation is mentally ill," he adds.

Elsewhere in the song, he raps: "COVID's near. It's coming to town. We gotta act quick, shut our borders down. Joe Biden does, the media embraces. Big Don does it, and they call him racist.

In a Facebook video announcing the three tracks in January, Kid Rock described "We The People" as a "hard rock-rap tune."

As previously reported, Kid Rock will join forces with FOREIGNER and GRAND FUNK RAILROAD for a U.S. tour this spring summer. JASON BONHAM'S LED ZEPPELIN EVENING will appear on select dates, with a special appearance by Trey Lewis at all shows. The 24-city "Bad Reputation Tour" will kick off on April 6 at the Ford Center in Evansville, Indiana, making stops across the U.S. in Nashville, Boston, Chicago, and more before wrapping up with two shows in Detroit.

Tucker recently made headlines after Mother Jones obtained a Kremlin memo instructing Russia's state media outlets that it's "essential" to air clips from Carlson's broadcasts because he "sharply criticizes the actions of the United States [and] NATO, their negative role in unleashing the conflict in Ukraine, [and] the defiantly provocative behavior from the leadership of the Western countries and NATO towards the Russian Federation and towards President Putin, personally."

The legendary Kid Rock sits down with Tucker for a rare one-on-one interview. And nothing is off the table. You’ll see part of the fascinating discussion Monday on Tucker Carlson Tonight at 8pm ET on Fox News. pic.twitter.com/5ZU9rIb5Vj