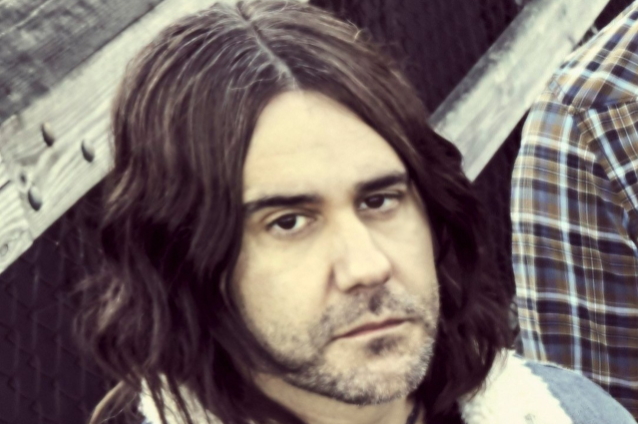 KILLSWITCH ENGAGE Bassist: 'We Like To Show The Audience That Not Every Band Is Going To Sneer At You Or Spit On You'

Rhino Radio conducted an interview with bassist Mike D'Antonio of Massachusetts metallers KILLSWITCH ENGAGE prior to the band's October 19 show at Academy in Birmingham, England, United Kingdom. You can watch the entire chat below. A few excerpts follow (transcribed by BLABBERMOUTH.NET).

On KILLSWITCH ENGAGE's penchant for being "hardcore heavy" and "silly" at the same time:

Mike: "We just like to have fun. You can't do this for 20 years and not have a good time or be friends with one another. We're all good friends. We're all taking the piss out of each other on stage. Whether the audience knows it or not, there's a lot of inside jokes that happen every show. We're just doing our thing. I think if we change now, people wouldn't understand. This is just the way we've been forever. Adam's [Dutkiewicz, guitar] is a nut. He's going to continue to be a nut and sometimes you got to let nuts go free and do their thing or nuts will smash themselves."

On whether he envisioned KILLSWITCH ENGAGE having such a lighthearted appearance upon the band's formation:

Mike: "I've played in serious bands before and I thought this was going to be a serious band, but as soon as Adam started on guitar, things started happening a little bit differently. But you don't have to take yourself so seriously all the time. We like to have fun with the audience; we like people to participate and just show the audience that not every band is going to sneer at you or spit on you or not appreciate that you're there. We like to have fun; we like to smile. Sometimes going to a show is all about getting away from the harshness or the meanness or the coldness of real life, and having a good time with your friends, your mates, and watching your band and smiling."

On whether KILLSWITCH ENGAGE has gone too far with its onstage antics:

Mike: "Always. Every single night it goes too far. I've had to take people in dressing rooms and say, 'Hey, you know that dress you had on tonight? Don't wear that color.'"

On whether there's a connection between being a musician and mental health issues:

Mike: "I think everyone has demons, so it's not like it's one or the other, an artist or a non-artist being plagued with nonstop nonsense. I'm definitely a product of being bullied my entire life, so it's not something I'm not aware of."

On whether looks or appearance is important to KILLSWITCH ENGAGE:

Mike: "I guess it depends on what type of band you're in. This band, I like the idea of us just being guys that just roll off the street, walk up and play music. No put-ons, no makeup, no things that we wouldn't normally wear in real life. This is probably what I'm going to wear on stage tonight, an IRON MAIDEN shirt. I like that. I like that we're just regular dudes who could be in the audience watching the band play or could be up on stage playing to the audience. There's really no difference to me, between the two. And also going back to one of the earlier questions, that's why I feel like we can wrangle and have everyone participate because there's really not a ton of difference. I like it that way."

KILLSWITCH ENGAGE's latest album, "Atonement", was released in August via Metal Blade Records in the U.S. and Sony Music Entertainment in the rest of the world.