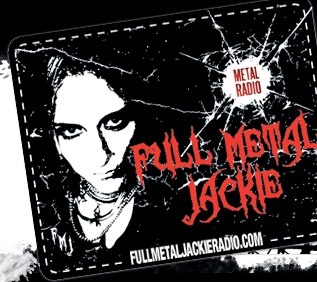 KILLSWITCH ENGAGE guitarist Adam Dutkiewicz and drummer Justin Foley, along with SILENT CIVILIAN (the band led by SPINESHANK vocalist Jonny Santos),will guest on this weekend's (March 26-28) edition of Full Metal Jackie's nationally syndicated radio show. Jackie will also be premiering new music from SICK OF IT ALL, WOE OF TYRANTS, BLEEDING THROUGH and SILENT CIVILIAN.

Not content to limit her exposure to New Jersey, Jackie set her sights on bigger markets (and warmer climates!),making her way west to California's gold coast. Establishing herself in Los Angeles, she learned the business side of radio and promotions while working for one of the music industry's largest management companies. After a short stint as on-air host at San Diego's 94.9 KBZT, Jackie landed the opportunity she had been working toward since her early WSOU days: host and producer of her own (and L.A.'s only) commercial heavy metal radio show, "Chaos", on Indie 103.1. Working alongside other Indie 103.1 hosts such as Steve Jones (of the SEX PISTOLS),Henry Rollins and Dave Navarro, Jackie quickly brought "Chaos" to the station's forefront.

Today, Full Metal Jackie's show continues to air on Indie 103.1 every Sunday night from 8 to 10 p.m., and can be heard online at www.indie1031.com, as well as in syndicated markets around the country through Envision Radio.