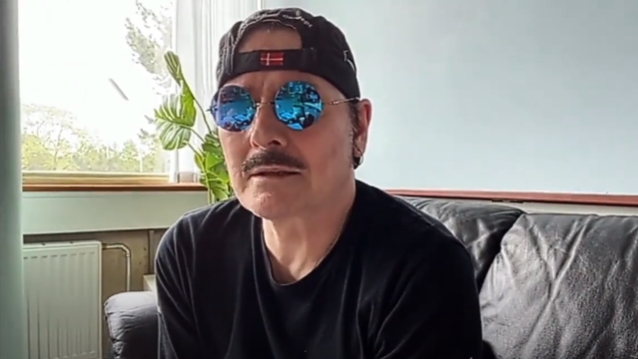 KING DIAMOND Reflects On His 1992 Jam With PANTERA: 'It Was Awesome'

During a recent Twitch livestream, legendary Danish heavy metal singer King Diamond reflected on his jam in Texas nearly 30 years ago with members of PANTERA. He said (as transcribed by BLABBERMOUTH.NET): "I once again sang [JUDAS PRIEST's] 'The Ripper' live with Dimebag [Darrell Abbott] and Vinnie [Paul Abbott] and Rex [Brown] from PANTERA on New Year's Eve here in Dallas. I had just moved to Dallas that time, so '92, I think, it must have been. Phil [Anselmo] was living in New Orleans; he wasn't there. But it was awesome. We did 'The Ripper', then we did 'The Green Manalishi', which is not a JUDAS song, but JUDAS did an amazing version of it, actually. And then we did 'Omens' [from KING DIAMOND]. Those three songs. It was really very fun. The most fun was actually the rehearsal."

He continued: "I had just moved to Dallas, and they got hold of me and they said, 'Hey, man, come over and hang out at the house a little bit and do this, if you're into it.' And I said, 'Okay. Sure, man.' So I drove for almost two hours — an hour and a half at least — to get to their house in Arlington. And there was a house in the back where the studio mostly was. And we went in there to rehearse. And I think we rehearsed 'Omens' once. And then they said, 'Let's go have some beer, man.' And I said, 'I haven't sung [the other songs].' Can we just go [through them] at least once?' 'No, it'll be fine, man.' We went in and had a beer. I only had one, 'cause I had to drive all the way back. But it was fun."

King added: "It was PANTERA, man. So, very, very good, very awesome memories that we had there. And I went home and I rehearsed like a maniac at home so I could come there and play that New Year's Eve with them. And everything was fine. You can actually find it on the Internet, I think."

When Vinnie Paul died in 2018, King took to his social media to shared a photo of the drummer wearing the King Diamond makeup at a HELLYEAH Halloween concert in 2014, along with the following message: "So sad, what a loss. Another true metalhead has left us way too soon.

"Vinnie and PANTERA were some of the first people to welcome me with open arms when I first moved to Dallas in 1992. Had so many great times together.

"Here's a photo of Vinnie dressed as me during a HELLYEAH Halloween show. To me, that was the coolest.

"I will miss you, friend.

"Rest in peace. I know Dime is waiting for you."

So sad, what a loss. Another true metalhead has left us way too soon.
Vinnie and Pantera were some of the first people...