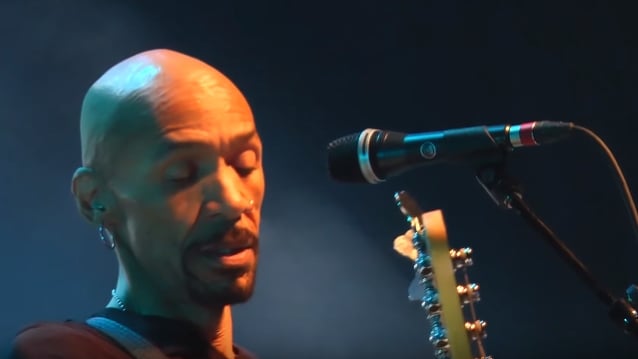 KING'S X Is Working On 'Amazing' Documentary: It 'Really Shows Who We Are And What We've Been Through'

Straus Project conducted an interview with KING's X frontman Doug "dUg" Pinnick prior to the band's December 7 concert at Arcada Theatre in St. Charles, Illinois. You can watch the entire chat below. A few excerpts follow (transcribed by BLABBERMOUTH.NET).

On the influence of Jimi Hendrix, whom Pinnick recently released a tribute album to:

Doug: "I guess he's a huge influence on me. I never thought about it. A lot of the stuff he does I mimic, but I never thought about it. I never sat down and sat through and studied it. It was like he kind of kept creeping up on me. All of the sudden, this record comes out called 'Band Of Gypsys' and it's Jimi Hendrix, Buddy Miles and Billy Cox. Now, Buddy Miles is one of my favorite musicians and singers and he always had a band with brass and he played drums. The three of them got together and I sat, 'Uh oh. Three black guys.' Very few black people played rock back in the '60s and '70s. If I saw anybody black playing rock music, I gravitated to it, because there was hardly any of us. I grabbed that record and put it on. From that point, I never looked back. Then I went back and discovered everything and found the genius. So, I guess I am a Hendrix fan and I never realized it. [Laughs]"

On his current projects, including a possible new KING's X studio album, which would be their first since 2008's "XV":

Doug: "We haven't even started on that. We're still in the final mixing of KXM III [Pinnick's project with ex-DOKKEN guitarist George Lynch and KORN drummer Ray Luzier]. When I get home, we got a few more songs to go through and listen to. I have a band GRINDER BLUES. It's ZZ TOP tuned to B. I'm burning the midnight lamp. It's time for a break, personally. I'm ready just to chill out for a while. I think I've done a lot of stuff in the last five or six years that I just want to sit back and enjoy it and just take a break. I haven't taken a break in ten years."

On taking part in a recent VAN HALEN tribute record:

Doug: "I did 'Light Up The Sky'. Oh my god. Okay, I never thought David Lee Roth was a good singer at all, never did. I met him. He said to me, 'I never thought I was a good singer. I bring the circus to town.' I'm going, 'Oh, I get it.' Then I went home and I got the opportunity to sing this song and I thought, 'Okay, I'm just going to sing it like Doug sings it.' I started to sing and it was horrible. I went, 'Oh no. I got to learn it exactly like he did it.' I got in my car and drove around town and got stoned and learned every mimic and inflection he did. When I got done, [I thought], 'You're a genius motherfucker. David Lee Roth, you are a badass, how you sing so great, how you can tell a story and slide in and out of the melody.' I went, 'Oh, wow!' From that day on, I'm going, 'Okay, much respect.' But, that's what it took. We're all like that. We don't like things until somebody kicks us. But that's probably one of the proudest… I don't have very many proud moments but that was one only because I nailed him. That's what I like. When I feel like I nailed somebody, that's when I'm happy. When I do me and everybody loves it, I just go, 'That's what I do.' When I copy Jimi Hendrix and you go, 'Oh my god!' Other than that, that's just me. I try to do everybody, but I can't. That's how everybody becomes original, you just try to imitate everybody else and it turns into a soup, then all of the sudden it's yours."

Doug: "The 'Hendrix Experience' tour, new KING'S X record, new Doug Pinnick record, new KXM record, new GRINDER BLUES record and what else…I think that's it for that. Everything is just about done except for the KING'S X record. KING'S X documentary. I forgot. We've been out for about a week and a half. We've got this filmmaker with a big crew and they've been following us around. They didn't wanna come here [to Illinois] because it's cold. In the summer they're going to come to Chicago for my family reunion. They're going to interview my mom. They're going to New Jersey where Jerry [Gaskill, drums] grew up. We're going to take them to school, meet people. It's a real movie documentary. The guy is a really big KING'S X fan. It's an amazing documentary. If you've seen some of his documentaries, it's really, really good. We're really excited to the point where we're letting him do what he wants. Back in Houston, we went around town to the first place we played as KING'S X and local watering holes that we played at, where we rehearsed. But he's doing an in-depth kind of thing. It's really deep. He even asked questions where I almost started crying. We were going into a lot of deep stuff. It kind of wore me out, too. I remember Jerry did a day with him and he said 'Doug, I've just got to tell you. Sometimes it's going to get hard, this interview.' He said 'That's all I'm telling you.' The guy is really pulling some good stuff out of us. He wants it to be a really, really good movie that really shows who we are and what we've been through."

KING'S X recently inked a deal with Australian independent record label Golden Robot Records for the release of the band's next studio album. The follow-up to 2008's "XV" is tentatively due in 2019 via Golden Robot's partners in the U.S., Europe and Japan.