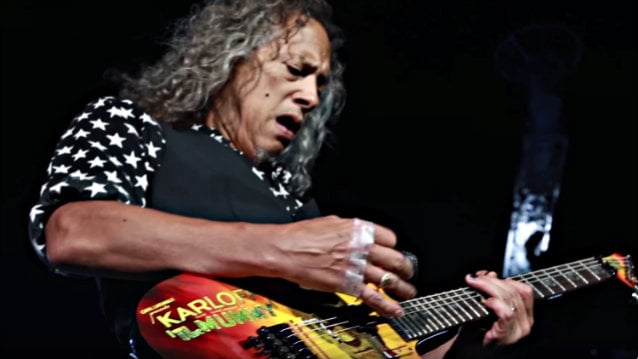 Kirk Hammett says that he was inspired by SOUNDGARDEN when he wrote the main riff to one of the most recognizable songs of all time, METALLICA's classic 1991 track "Enter Sandman".

As the opening cut on METALLICA's self-titled album, "Enter Sandman" became bigger than the band could have imagined. It was a game changer for METALLICA, which ended up selling more than sixteen million copies of the album in the U.S. alone. Meanwhile, the song itself turned into a staple at athletic events, including professional baseball games and wrestling matches.

Hammett joined 98.5 The Sports Hub's "Toucher & Rich" on Wednesday morning (September 13) and shared where he found the inspiration for writing that song back in 1990.

"It was very specific," he said. "I have a very specific memory. It was about two or three o'clock in the morning. I had just been listening to 'Louder Than Love', the [second] SOUNDGARDEN album. It was when SOUNDGARDEN [was] still somewhat underground and [was] on an independent label. I just love that album; it's a great SOUNDGARDEN album. And I heard that album, I was inspired, I picked up my guitar and out came that riff."

Hammett said that he knew right away "it was a cool riff. You kind of get an idea that a riff is cool, 'cause when you play it, if it's a cool riff, you can just instantly groove on it," he explained. "So, yeah, [I thought], 'Yeah, this is pretty cool. It's a good feel, it's a good sound, it's a good combination of notes."

The guitarist recalled that the song started to take shape once he played the riff to one of his bandmates. "When Lars [Ulrich, METALLICA drummer] heard the riff, he said, 'Repeat that first part four times,' and I did, and he said, 'There you go,'" Hammett told "Toucher & Rich".

In a 2012 interview with Rolling Stone, Ulrich reflected on "Enter Sandman" and its influence behind the so-called "Black Album." "There was a riff on Kirk's riff tape," he explained. "The whole song is just that riff. 'Enter Sandman' was the blueprint. The rest of the record appeared over two months."

After the "Black Album" was first released, a number of people commented that the "Enter Sandman" introduction and dominant musical riff were similar to that of a song that came out two years earlier, "Tapping Into The Emotional Void" by the Los Angeles quartet EXCEL.

MEGADETH mainman Dave Mustaine, who was a member of METALLICA for less than two years, from 1981 to 1983, famously told Metal Maniacs magazine in a 2004 interview that "Enter Sandman" "was ripped off from a band called EXCEL."

METALLICA co-manager Cliff Burnstein told the Los Angeles Times that he had never heard of the EXCEL song. But he chalked up the songs' similarities to coincidence.

"If EXCEL could write that one (as good as that),I'm sure they can write more," Burnstein said. "Then they'll be successful."

"Enter Sandman" still stands as the biggest hit of METALLICA's career, having peaked at No. 16 on the Billboard Hot 100 chart back in August 1991.