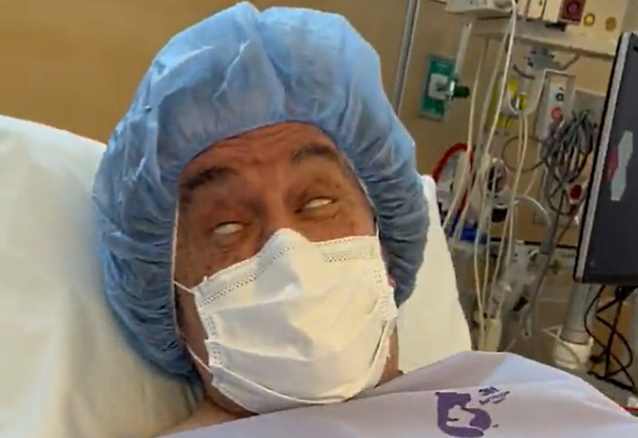 Some of Gene's fans expressed their concert after the 73-year-old rocker's wife, Shannon Simmons, uploaded a photo of her husband's socks at the hospital, along with the caption "Gotta love #hospitalsocks @genesimmons getting #kidneystones blasted again! #poorbaby". A couple of hours later, Gene himself shared a video of him lying on the hospital bed while wearing a medical gown and a head covering, and he included the following message: "Hey, thnx you guys for the calls, but honestly I'm fine. Shannon took the video..Just cleaning the tubes for excess kidney stones. Looks awful, but really no big deal. Took an hour, then drove to have a hot dog. I appreciate your good wishes".

Back in October 2019, Simmons underwent a successful kidney stones surgery. The non-invasive operation at Cedars-Sinai Hospital only took about an hour to complete and involved inserting a stent in his urethra to help him pass his stones. The stent was reportedly removed within a week.

A few days earlier, KISS postponed its concert in Salt Lake City. At the time, Simmons tweeted that he had to fly to Los Angeles "to do a medical procedure." He added: "Nothing serious. But it must be taken care of now."

Earlier this year, Simmons said in an interview with The Sun that he is against drugs and booze which he says lead to you "fucking around with cancer."

Simmons, whose KISS bandmate, drummer Eric Carr, died of cancer over 20 years ago, said: "You can fill your body with garbage. Put it into your car and see how far your car goes. I don't care if it's a Rolls-Royce, it's going to splutter and die. The more shit you put into your body, the more you're going to be a walking pot of shit."

Simmons went on to say that he avoids toxifying substances, particularly crack cocaine and alcohol, at all costs.

"I don't mean to say I don't love cake or pasta, or things like that, but crack is out of the question," he said. "Drugs don't work, booze don't work, cigarettes — all the people who think you look cool. You're fucking around with cancer. It just doesn't work."

Hey, thnx you guys for the calls, but honestly I’m fine. Shannon took the video..Just cleaning the tubes for excess kidney stones. Looks awful, but really no big deal. Took an hour, then drove to have a hot dog. I appreciate your good wishes 🤟😎. pic.twitter.com/3EThQziSc1