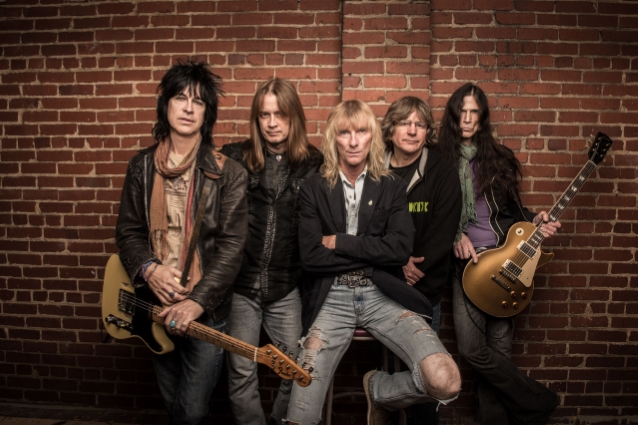 KIX Frontman Says Original Bassist DONNIE PURNELL Is 'Missed As A Friend,' But Not As A Bandmate

During a recent appearance on the "Cobras & Fire" podcast, KIX frontman Steve Whiteman was asked why founding member, songwriter and bassist Donnie Purnell hasn't been involved with the band since it first reunited about a decade and a half ago. "Donnie is a very bitter person," Steve explained. "And the only reason that we're doing these shows and the only reason that we ever even got back together was because [my other band] FUNNY MONEY would go out and play, and I had Mark [Schenker] on bass, I had Jimmy [Chalfant] on drums — I finally got him out of retirement and recruited him — and then once in a while, Ronnie's [Younkins, guitar] band, THE BLUES VULTURES, would come out and play with us and we would get Ronnie up on stage and do a mini KIX set. So that's where it really evolved from. And then this promoter gets the big idea, 'Let's fly Brian [Forsythe, guitar] in and let's put the whole band together and see what happens.' And it exploded locally. So that's what triggered it. So there was no need to bring in the headache, the iron fist, the guy that's gonna rule everything and control everything. And we thought, you know, this is so fun, this is so nice, not having to deal with all that stuff, that we should leave it alone. So that's what we did."

According to Steve, the idea of bringing Donnie back was never even discussed. "And it's not just me — it was a consensus of everybody in the band, that they never wanna deal with that again," he said.

Asked if he has any idea what Donnie is doing right now, Steve responded: "I have no clue. I really don't. I hope he's doing well, 'cause I have great respect for him. He pulled me out of a little town in West Virginia and took me to the top of my game. And we all feel like that. But he was not an easy person to work with. So he's not missed, working with, but he's missed as a friend."

In 2012, Whiteman explained that Purnell was deliberately left out of KIX's reunion after the singer endured "the most unpleasant and nasty conversation I've ever had in my life" with the bassist.

Whiteman said: "There was a song Donnie and I had written that I wanted to release. I called him up so he wouldn’t be blindsided by it — and he tore into me. He called me every name in the book. He accused me of using his name and his talent and said I was taking the song from him. Right then I decided I never wanted to go through that ever again. When it came time for KIX to reform, it was our decision not to have him involved."

KIX will release "Fuse 30 Reblown" on September 21, exactly 30 years after "Blow My Fuse"'s original September 19, 1988 release date. KIX announced the release from the stage of the M3 Rock Festival where the band performed "Blow My Fuse" in its entirety to their hometown crowd.

"Fuse 30 Reblown" features a Beau Hill (ALICE COOPER, RATT, WARRANT, KIX) remixed and remastered version of KIX's Atlantic Records "Blow My Fuse" album, as well as special never-before-released demos of all 10 tracks, recorded in the early-to-mid-1980s. "Blow My Fuse" features the group's biggest hit, the power ballad "Don't Close Your Eyes", which reached No. 11 on the Billboard Hot 100 in early 1989. The album achieved platinum sales and peaked at No. 46 on the Billboard Top 200, making it the most successful of the band's 35-year career.