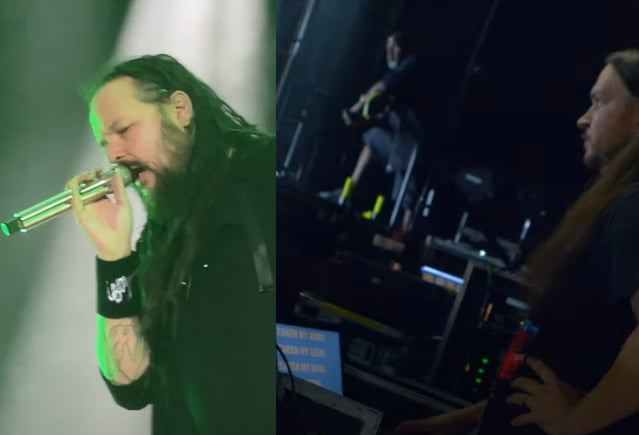 KORN guitarist Brian "Head" Welch has shared the latest episode of "All In The Family", a new YouTube series in which he takes a look backstage to show fans the individuals that make KORN live shows happen. The second episode in the series, which focuses on KORN band assistant Scott Sheppard, can be seen below.

According to Sheppard, one of the most important duties he has to perform is to "run the teleprompter" on stage for KORN singer Jonathan Davis. "It's not a secret; I mean, you can clearly see it," Scott said. "It's out there on stage. But when you have 14 albums and you've written hundreds of songs… And when you're rocking out, you're not standing still the whole time — you're walking around, jumping up and down — so every once in a while you wanna just see where you are in the song. So that's my job."

When Welch asked Sheppard if he has ever messed up and put a wrong line up on the teleprompter, Scott said: "It happens, but honestly, it's very rare. And I don't know if it's because… Since I personally know all the songs, it's really easy for me to follow along. Other people, if they just jumped in the spot and they didn't know the songs at all, yeah, I could imagine it'd be very difficult."

Sheppard went on to say that Davis is usually relaxed about any teleprompter mistakes that Scott might be responsible for. "He just gives me an eye, like a side-eye," Sheppard said. "He usually forgets [about it] by the time the show is over."

Two months ago, TWISTED SISTER's Dee Snider, DISTURBED's David Draiman, STRYPER's Michael Sweet and SHINEDOWN's Zach Myers were among the musicians who defended Vince Neil after several video clips of MÖTLEY CRÜE's July 5 concert in St. Louis, Missouri showed the onstage teleprompter which the singer is apparently relying on to get him through each show.

Two days after BLABBERMOUTH.NET first published a story about Vince's teleprompter reliance, former MTV "Headbangers Ball" host Riki Rachtman took to his Twitter to write: "So @MotleyCrue used a teleprompter. Really who fuckin cares. Did you have fun at the show? That’s what matters. A lot of bands have used teleprompters STOP looking for reasons to criticize. Recorded vocals an artist not caring is bad Teleprompters? Who cares".

Snider shared Riki's tweet and chimed in: "True that! MOST bands are using teleprompters. Not me, but I didn't kill a lot of my brain cells with drink and drugs (not a criticism. More of an explanation)."

He added: "STOP being so damn critical and just enjoy seeing the people you love on stage! Now lip synching is another story!"

Draiman took to his Twitter to write: "All you parasitic vultures pretending to be journalists who broke the 'big story' that Vince Neil/ @MotleyCrue uses a teleprompter onstage should really find a new line of work.

"SO FUCKING WHAT? Most artists with extensive catalogs do.

"Steven Tyler has been 15 of them onstage".

Sweet was equally dismissive of the newsworthiness of the Neil story, writing on Instagram: "I hate to break it to you since this is 'BIG' news but many artists our age (or close to it) use teleprompters of some sort. Or lyric sheets, or other means. I used a teleprompter back in 2008 when I was with BOSTON! I use an IPad now for certain lyrics. When you've got a huge catalog that dates back to the early eighties (and you're getting a little older),it's pretty much impossible to remember the lyrics to every song.

"Why is this news? Give the guy a break. Would you rather he forgets the lyrics so you can beat him up for that?

"I have to say this - it's the best I've seen @thevinceneil do (performance wise) in a long while. He's obviously been working hard and it shows IMO. Regarding teleprompters - who really cares?

SEVENDUST guitarist Clint Lowery concurred, writing in the comments section below Sweet's post: "Dude has a catalogue of material to remember. Good for him for making sure he has a fail safe to glance at from time to time. God forbid he misses a lyric he'll get torn apart. Any band that has more than 3 records should use one. We would but we can't afford to have it on deck haha".