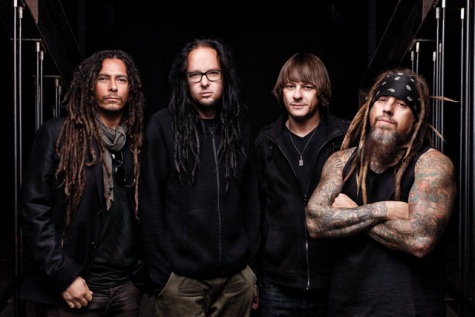 Monster Energy recently conducted an interview with KORN frontman Jonathan Davis. You can now watch the chat below.

KORN's latest album, "The Path Of Totality", saw the band teaming up with dubstep producers and DJs to add a whole new electronic layer to their sound.

Much of the material for the album was recorded at Jonathan Davis' home studio, and he laid down vocals at home or in hotel rooms while on tour.

The album was released in two configurations: as a standard 11-song CD and a special edition CD that included bonus tracks as well as a DVD of "The Encounter", a full-length video concert of KORN's mind-blowing, once-in-a-lifetime performance in the middle of a 900-foot-long crop circle in a wheat field in Bakersfield. The complete concert, previously seen in 2010 on TV and online in an abbreviated form, was offered in its entirety to those who purchase the deluxe version.