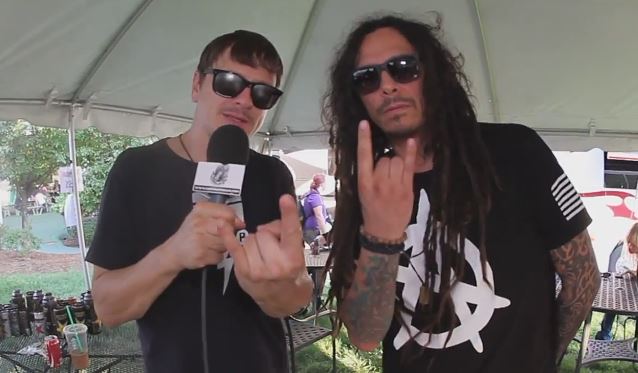 Jo Schüftan of Horns Up Rocks! took part in a roundtable interview with KORN guitarist James "Munky" Shaffer and drummer Ray Luzier at the July 27 stop of the Rockstar Energy Drink Mayhem Festival in Hartford, Connecticut. You can now watch the question-and-answer session below.

Speaking about KORN's plans for the band's next album, Munky said: "Where we are now, I think, is a good combination, with Brian ['Head' Welch, guitar] returning to the band and having all five of us in a room writing. That's the page we're on, and that's kind of from where we started on 'The Paradigm Shift' and I think it's a good wave and we're still riding it. It feels like a good place for us to be, with the organic way of writing, like I said, all five of us a in a room together, and then including some of those techniques, with the tools of recording that are available to everybody now on their laptop. But using it the right way is what you've gotta be able to know. I think… I don't know. It's gonna be interesting to see what we do on the next record. I kind of feel like it's gonna lean towards a bit more funk… so it's a little more funk metal."

For the "World Tour Edition", the Bakersfield quintet lock and load last year's critically acclaimed "The Paradigm Shift", with three brand new songs including their just-released single "Hater", plus "The Game Is Over" and "So Unfair". In addition, it's been beefed up with a bevy of live tracks recorded all over the globe and expanded artwork. It's the ultimate way to experience "The Paradigm Shift". Among the other unreleased material, Davis opens up about his young son Zeppelin's battle with diabetes on the powerful "So Unfair", while "The Game Is Over" slams with the intense catharsis fans worldwide expect from these legends.

KORN frontman Jonathan Davis told The Pulse Of Radio that "Hater" is a direct rebuttal to the kind of person described in the title of the song. "Everybody has a hater," he said. "Everybody has someone that hates on you because you have something they want. And it's really, like, the first empowering song I've ever wrote where it's just blatantly telling you — I mean, the lyrics are: 'You can't bring me down/I've already had my life turned upside down/I ride a downward spiral round and round/But I keep flying, I keep fighting/You'll never bring me down.' That's like the most positive shit I've ever wrote. And it's so different. Everyone that's heard it loves it."