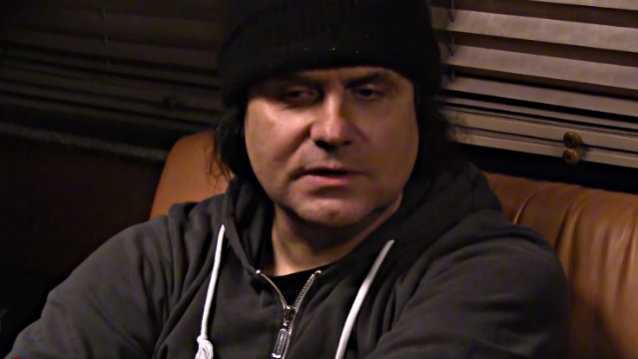 KREATOR Frontman: 'I Try Not To Sound Like Anyone Else'

Jimmy Kay from Canada's The Metal Voice conducted an interview with guitarist/vocalist Mille Petrozza of German thrash metal veterans KREATOR prior to the band's April 12 show in Montreal, Quebec, Canada at Club Soda. You can watch the full chat below. A few excerpts follow (transcribed by BLABBERMOUTH.NET).

Mille: "As a kid, I was listening to a lot of JUDAS PRIEST, IRON MAIDEN. Later on, I got into VENOM, all of the old-school stuff. MERCYFUL FATE, a lot of MERCYFUL FATE. Anything from THE BEATLES to Lana Del Ray… to anything. Kate Bush. I listen to everything; all kinds of music. I don't know if that is a direct influence on the music. I don't really think about it, really. When I write an album, it's almost like it's very spontaneous. It's very intuitive. I'm really focusing on what's coming out and don't think about what's going to transpire. What I try to do is, I try, since I absorb a lot of music, I try not to sound like anyone else. Rather than being influenced, I try to filter the riffs that I write in the category of whether or not they sound like somebody else. That's more like a negative…you get rid of things rather than you put in things where you go 'I want to write a part that sounds like THIN LIZZY.' If I hear it and it sounds like some other band, I go 'No.' I would re-write it to make it sound like KREATOR. That's maybe the way that I write."

On how KREATOR's music could be considered a reflection of today's world:

Mille: "It's very easy if you open your eyes. You can see it all. It's right there, every day, every time, all the time. It's nothing that I do…again, I don't think about these things. I write about stuff that just moves me from the inside and every time I have my lyrics done at the end of the day, mostly, five minutes before I record them, the final version, I can see it mirroring reality. It's like that with a lot of bands that don't sing about personal emotions like love. There's a lot of bands, or a lot of artists that write more personal stuff and I don't really write…I do write personal stuff, but it's very hidden. I guess if you write, like I said, I avoid current events to pop up in my lyrics, like saying names or mentioning places where something took place, or attacking certain people in my lyrics. I just try to keep it more general. Maybe that's why you could take 'Gods Of Violence' as the soundtrack to the Syrian war where you could have taken [2012's] 'Phantom Antichrist' to the soundtrack of whatever was going on back then. It's just a matter of all my lyrics are reflected by stuff that's actually happening, but I don't want to mention them. It's hard for me to talk about lyrics."

Mille: "It's a different album. It's little bit of a different approach. Some people said that it shouldn't have come out under the name of KREATOR. I think it should have."

Mille: "We just did 'Renewal' here and there, the title track pops up. For some reason, we don't play so many songs from 'Cause For Conflict' because the album…there's some bad memories from that album. That's one we should re-record one day, but then again, it's over."

On whether he felt any pressure in the '90s to fit in with industrial-sounding bands:

Mille: "It's not that we felt any pressure. The general vibe was a different one. We were in a mindset where we wanted to experiment with different sounds because it was an exciting time. It was an exciting new technology. When you're a musician, you want to experience it. That's the reason why we experimented with all of these new technologies, even though it was in a very primitive way because we came from a different era of music. We didn't really know too much about electronic music even though we come from a country that brought out bands like KRAFTWERK, but we never really went into that direction before it was accessible for us and also possible for us to experiment with these sounds."

On what his "desert island" album would be:

On how long it took for him to become proficient at rhythm guitar:

Mille: "I'm still learning. It depends on the time of the day. I'm not as perfect as it might sound. I can be very sloppy if I have a bad day. I'm constantly learning. Once you say it's perfect, it's over. If you say, 'This is it. I'm perfect. That's it.' Then you're done."

On what KREATOR has left to accomplish: