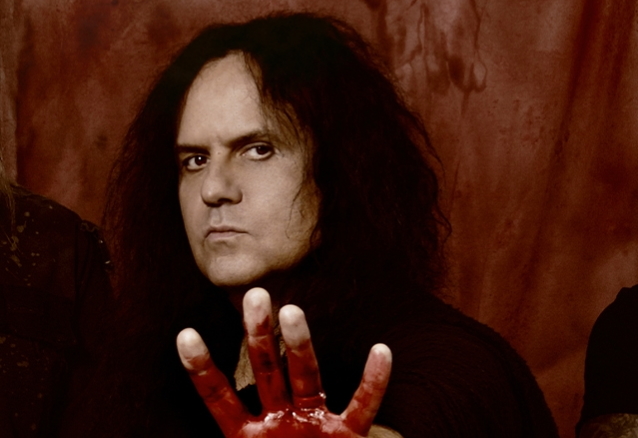 KREATOR's MILLE PETROZZA: 'It's Great To See People Back Together Celebrating Music'

In a new interview with the "Everblack" podcast, KREATOR frontman Mille Petrozza spoke about what it has been like for him and his bandmates to return to the live stage after being forced to take a nearly two-year break due to the pandemic. He said (as transcribed by BLABBERMOUTH.NET): "I think what we experienced now is something that we… for some reason, we felt very safe in the way things were going. We thought things wouldn't change, and all of sudden the pandemic hit. And we were all, like, 'What the fuck?' Especially artists that couldn't go out and play for the fans anymore. And it was kind of like a shock. Nobody knew how long it would take. And it's still kind of not gone, but things are getting better; the world is opening back up. We played a couple of shows, and it's great to see people back together celebrating music, because that's also a very, very important thing in our lives. I think it's definitely not healthy to not go to live concerts. I just went to see RAMMSTEIN yesterday, and it gives you so much — it gives you so much power, so much energy. And it's an essential part of life — in my life at least — and I think in a lot of our fans' lives, or most of our fans' lives as well. It's great to see things are finally coming back — slowly but surely."

KREATOR's fifteenth studio album, "Hate Über Alles", will be released on June 10 via Nuclear Blast. The follow-up to 2017's "Gods Of Violence" was recorded at Hansa Tonstudio in Berlin, Germany. Helming the sessions was Arthur Rizk, who has previously worked with CAVALERA CONSPIRACY, CODE ORANGE, POWER TRIP and SOULFLY, among others.